Winds that howl along Argentina’s Atlantic coast have long captivated the energy industry. But it wasn’t until Mauricio Macri’s government offered appealing terms that the country’s clean power boom began.

Since 2016, billions have flooded into the struggling nation as generators worked to harness those famed gusts, as well as world-class solar conditions. Clean energy attracted about as much money as state-run oil giant YPF SA spent on shale fields regarded as Argentina’s golden ticket to a stronger economy.

But now hopes for a wind-powered future are fading as Macri’s pro-investment experiment collapses into yet another bout of financial turmoil and a jolt back to interventionism under new President Alberto Fernández. Pessimism stems not only from policies already implemented in Fernández’s first weeks in office but also from precedents in several other nations where government changes put the breaks on clean energy development.

“The government looks less likely to encourage private development in the power market,” Natalia Castilhos Rypl, South America analyst at BloombergNEF, wrote in a report. That would push ambitious renewable goals “even further out of sight,” she said. 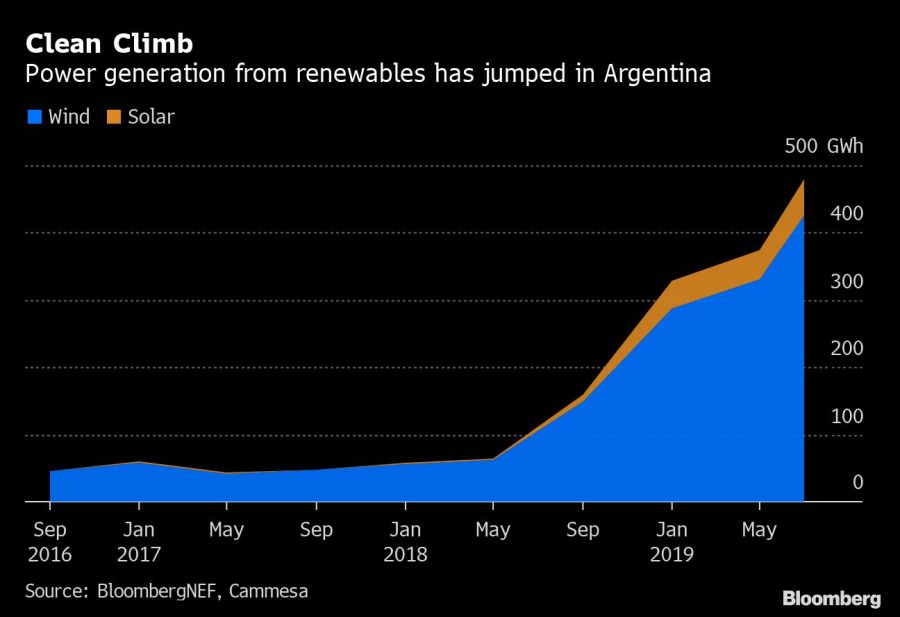 Several factors are fanning fears that clean energy will be one of the biggest casualties of the free-market fizzle. For a start, Fernández has tightened capital controls and is preparing to renegotiate tens of billions of dollars of sovereign debt, leading an industry that relies on global finance to brace for the worst.

The new administration also froze the cost of electricity for six months as it looks for a new pricing framework after Fernández campaigned on “un-dollarising” utilities, raising fears he will meddle with the terms of power purchase agreements. That’d be disastrous for renewable projects because the years-long stability that PPAs provide was very often the catalyst to getting the green light from investors.

The government’s renewable energy office — which organised auctions during Macri’s four-year term that raked in US$5.4 billion of investment, compared with just US$395 million in the previous four years — may also lose rank as it’s merged into a broader power department.

While the office’s future is still uncertain, the mere possibility it’ll be downgraded is driving a strong suspicion that renewables — and more auctions — aren’t a priority.

What’s more, the new president has already been meeting with oil executives, promising them a law that’d safeguard investments in a bid to reverse waning shale activity. There have been no such signals to power generators, who are tasked with supplying 20 percent of electricity needs with renewables by 2025, a target that was already looking hard to reach. 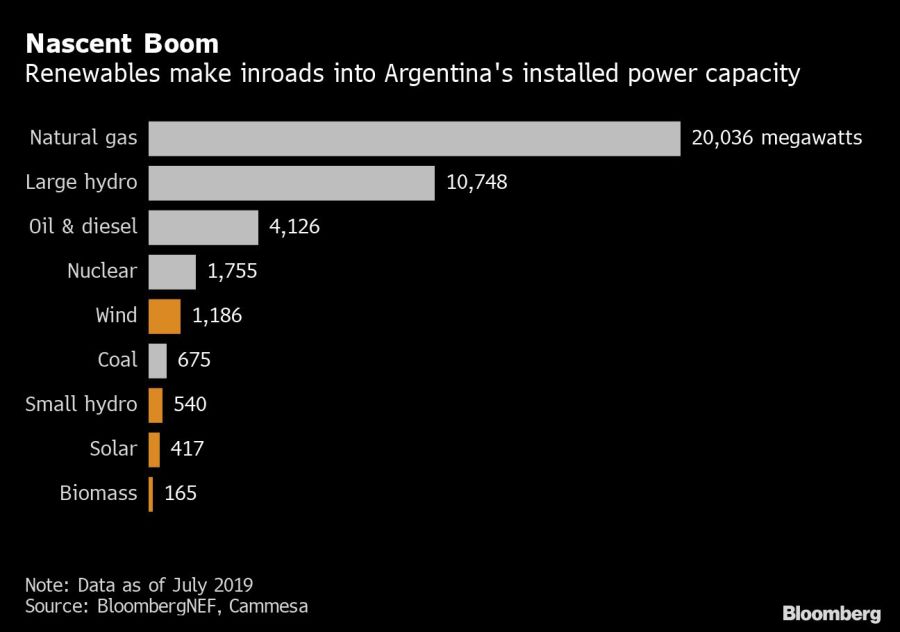 There are plenty of examples of clean energy’s vulnerability to policy swings. Spain’s solar industry is just starting to gather speed again after the government imposed retroactive subsidy cuts that curbed runaway growth. In Taiwan, officials slashed prices for wind generation, while the US has moved to undermine the economics of clean energy by levying duties on imports of solar equipment.

If renewables do slip down the pecking order under Fernández, the dynamic would most closely mimic what’s happened in Latin American neighbour Mexico under leftist President Andres Manuel López Obrador, said James Ellis, head of research in the region for BloombergNEF.

Under López Obrador, Mexico is strengthening the role of state-run entities like oil driller Pemex and electricity company CFE to the detriment of private investment. That’s casting a pall over a renewables rush that had taken root before he took office a year ago.

To be sure, Argentina’s progress in renewables had already begun to stumble under Macri, who failed to tame a fiscal deficit and turned to the International Monetary Fund for a record credit line. Capital controls introduced by Macri last year — in a desperate attempt to protect Central Bank reserves—threw grit into companies’ plans.

The controls meant international banks halted disbursements for funding construction of several projects because they weren’t sure how they’d get paid back. Restricted access to dollars also slowed imports of turbine parts.

There are 2.3 gigawatts of wind farms and 1.1 gigawatts of solar farms in Argentina’s clean energy pipeline that still need to secure financing, according to BloombergNEF’s Castilhos Rypl. In total, those investments are worth about US$4.8 billion.

Renewables investment can spur the economy at a time when Fernández wants growth to be able to pay back creditors, and wind farms that tap impressive coastal gusts can also help the government bring down power prices, said Ben Backwell, who heads the Global Wind Energy Council lobby group.

The key issue is project finance, but that’s becoming evermore problematic amid tighter capital controls and looming sovereign debt renegotiations. Still, there was a morsel of good news earlier this month when YPF Luz signed a financing deal for a wind farm in Patagonia.