A Venezuelan soldier takes cover behind an armoured vehicle. For 48 hours he has ducked flying bullets.

He is not on a battlefield but rather in a suburb of Caracas, the capital of violence-ridden Venezuela which in his own words is "a country at war."

The scene played out this month in the slum of Cota 905, which shares a name with the gang that runs it with impunity.

It is one of several Caracas suburbs – all of them poor – lorded over by criminals who terrorise locals largely unhindered in a country in dire economic and political straits.

Amid the turmoil, the gangs have created parallel empires funded by drug-trafficking, extortion and kidnapping.

In Caracas, a city of some two million inhabitants, they run the slums with a heavy hand from their comparatively fancy houses in the wealthier, higher parts of the hilly neighbourhoods.

The gangsters impose their own law: determine the cut-off time for parties, set visiting hours for outsiders, even resolve neighbourly disputes.

Venezuela and Colombia name ambassadors in step toward normalisation

They execute people they accuse of being police informants and mete out harsh punishment for those who fail to pay protection fees – called "vaccines" in these parts.

Armed to the teeth

On July 7, the powder keg exploded as it does every so often.

In the early morning hours, shots rang out and members of the Cota 905 gang took to the streets ordering inhabitants to stay at home and cautioning police not to enter.

Nobody knows quite what started it.

March in Caracas protests against detained plane in Argentina

From the hills overlooking the slum with its dirt roads and precarious homes, the gangsters – known locally as "malandros" – fired at buildings, cars and pedestrians below, from trenches shielded by sand bags.

At the entrance to the slum, AFP was held up by a group of self-styled young "soldiers," mainly teenagers, armed to the teeth with assault rifles, machine guns, shiny new pistols, full magazines, hand grenades, binoculars and two-way radios, though dressed in civilian clothes.

Others kept watch from the roofs or terraces of nearby buildings.

The youngsters confiscated AFP's recording equipment, returning it only after a thorough inspection and quite some negotiation.

"We are not thieves..." insisted one.

"We do not want the police here," he said, explaining the roadblock. "They commit acts of violence here... they should not come here."

A few metres away, a bloodied person, seemingly dead, lay prostrate in the street.

A passerby checked for signs of life with a few swift kicks. The body ended up lying there for 24 hours.

Then, the police surrounded four of the slums, including Cota 905.

"We have to climb the hill to dislodge them from there... there will be deaths on both sides but we are stronger, we will win," said one police officer, a copy of Sun Tzu's The Art of War on his patrol car's dashboard.

A gangster and a policeman confronted each other on the two-way radio system, the officer using a nickname to call out to Cota 905 leader Carlos Luis Revete, for whom the government has offered a reward of $500,000.

"Koki, where are you, you monster?" the officer asked, using the alias.

The reply from the other end: "Damn police, we are going to kill you."

"Come down if you are man enough," the policeman called.

"Come up and you will see... you and your family!" the voice on the other end said.

The threats did not deter the security forces who assailed the hills that night.

"Ratatatatat," she imitated the sound of the gunfire. "I have never seen this here, and I grew up here."

The woman, who wished to remain anonymous, lives with her family in a "rancho" as locals call the poor houses here – usually built of wood and exposed brick, with zinc roofs.

"Bullets go right through the rancho," she said. She and her family went to seek shelter with others in a sturdier brick house in the neighbourhood.

"There were about 50 of us: children, women and some men," she recalled. "We waited the whole night until things calmed down."

The toll after two days of fighting: 22 "delinquents" and four members of the security forces, according to authorities.

Nobody knows how many civilians died or were injured.

Many of the gang leaders, including Koki, managed to escape.

Caracas slum residents have long been left to their own devices.

In 2013, police agreed to so-called "zones of peace" from which they undertook to steer clear if the gangsters promised in return to abandon their criminal activity.

It was a "romantic idea," criminologist Fermín Mármol told AFP, but an error that allowed the gangs to entrench themselves and prosper.

One of the sectors controlled by Koki’s gang, for example, is known as "The Cemetery," perched on a hill from which the gang throws dead bodies into a graveyard below. Without any qualms.

According to the Venezuelan Violence Observatory, the country's violent death toll is seven times the global average.

Venezuela is among the top 20 drug-trafficking nations in the world and among the 15 most corrupt, said Mármol, with an estimated 18,000 criminal organizations at work inside its borders.

More than 90 percent of crimes are never prosecuted.

New recruits are mainly youngsters from poor areas easily seduced with money, arms, and promises of an affluent life like those of the gang leaders with their sports cars and jacuzzis, even home discos.

Similar to drug-lord Pablo Escobar paying for schools, food and medical care to curry favour with Colombians, the gangs of Caracas are also said to help communities by "offering them things the state cannot provide anymore," said a member of an NGO for crime victims. "This creates a certain sympathy."

But it is fear that reigns supreme.

"One does not get used" to the violence, said Deny Rodríguez, a 44-year old who has to cross one of the gang's areas every day to get to work.

"We are afraid... we never know if we will get where we're going."

"I wake up every day asking God for a calm day," said another resident.

"One sleeps and does not know if a bullet will enter... it is exhausting. I have nightmares."

The violence further worsens the plight of Venezuelans by weakening the economy, scaring off both investors and tourists.

Mármol said the violence will not stop until a fully functioning government reinstates public services and security in the gang-run areas.

"Every time the police leaves, another criminal structure takes over," he said.

Meanwhile, people like 40-year-old Jesús Rey, a fridge repairman, have shelved any illusions of a better life.

"An apartment elsewhere is difficult and very expensive. I don't like living here very much, but I got used to it. It's my lot."

Honduras extradites alleged drug matriarch to the US 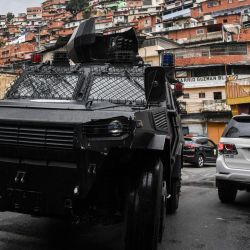 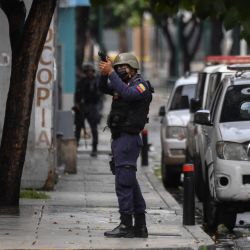 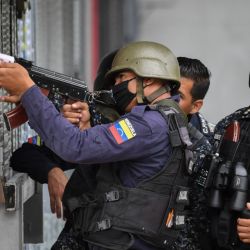 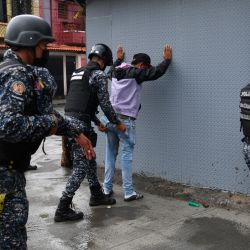 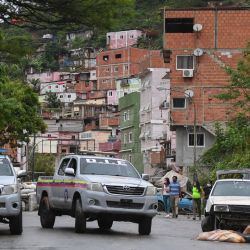