Large crowds of opposition demonstrators took to the streets in cities across the country on Monday to protest against President Alberto Fernández's government, its proposed judicial reform package and plans to extend confinement measures against the coronavirus.

Demonstrators defied social distancing rules on the '17A March,' answering calls to protest against a government announcement last Friday to extend containment measures in the Buenos Aires metropolitan area (AMBA) until August 30.

The AMBA region is home to 90 percent of the country's growing coronavirus caseload.

Protesters also protested against Fernández's planned judicial reform to expand the number of federal courts in an effort to dilute the influence of judges suspected of making politically motivated decisions.

Some signs condemned vaccines and alleged the lockdown to tackle the spread of Covid-19 is part of a global plot to subdue citizens.

The protests in Buenos Aires and other main cities took place despite a recent easing of restrictions in much of the country, even as the country battles a steady rise in infections. Large ralies also took place in Santa Fe, Córdoba, Mendoza and Buenos Aires Province.

"They want to dominate us through the disease, the confinement," protester Gustavo Álvarez told AFP while demonstrating, as he yelled for "people to rebel" against the lockdown.

To his side, fellow demonstrator Viviana Caferatta alleged that Argentina "does not have a democratic government," without offering a reason why.

"If [Donald] Trump or [Mauricio] Macri were [in government] here, it would be another type," she said.

According to the latest health figures, Argentina has recorded nearly 300,000 infections and 5,750 deaths from the coronavirus, while reporting more than 5,000 new cases a day for the past week. 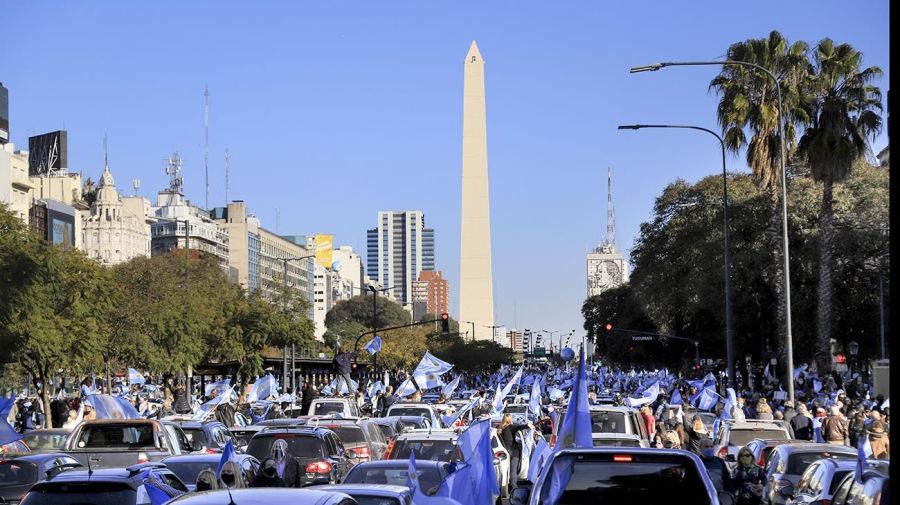 Earlier Fernández, whose judicial reform plans were a key part of his election campaign, called for unity in a speech commemorating Argentine revolutionary leader José de San Martín, who died 170 years ago on Monday.

"We have lived a unique moment of humanity, not just in Argentina, where a pandemic is besieging us, infecting us, sickening us, killing us," he said.

The task ahead was to rebuild a country that has been "economically annihilated," by the former government of his predecessor Mauricio Macri.

"They have left behind an impressive amount of debt, they have conditioned the future of many generations and they have plunged more than 40 percent of Argentines into poverty," Fernández said.

"United I am sure we will win, " said the Peronist leader, paraphrasing San Martin.

The government imposed a nationwide quarantine on March 20, before gradually easing it in much of the country.

It also launched a multi-million dollar package of social and business aids to shore up an economy that has been in recession since 2018.

Sectors of the main opposition coalition were split over the rally, with some lawmakers keen to take part and others eager to ensure the rally was portrayed as a rising up of citizens.

PRO party president and ex-security minister Patricia Bullrich was among those who attended, filming a video which she alter shared on social media.

“I come to tell the president that quarantine may not exist for him, but it does exist for thousands of workers: gastronomic workers, artists, plumbers. A lot of people who are having a hard time being out of work. The truth is that I would have liked more understanding," she wrote.

Former vice-presidential candidate Miguel Ángel Pichetto did not take part, but he told reporters that it had delivered "an important message to the government and the opposition," stressing how keen citizens were to "get back to work."

By way of contrast, Cabinet Chief Santiago Cafiero issued an apology to healthcare professionals "for failing to prevent the opposition from seeking another way to protest."

The government official apologised to "the doctors, male and female nurses, and to all the essential personnel who are putting their body on the lives every day."

Buenos Aires Province's Deputy Health Minister Nicolás Kreplak expressed similar concerns. "It saddens me that a small part of our society does not understand the harm that can be done to others with this type of expression," he said. "They do not value the effort that the health system is making to take care of us. Contagions stop if we do not circulate. There is no magic recipe."