The Grandmothers of Plaza de Mayo are getting older. Every day the hopes of finding their grandchildren, who were stolen and given up for adoption under Argentina's dictatorship, are fading.

As many as 500 children were taken from their imprisoned mothers, most of whom then disappeared under the country's brutal 1976-1983 military rule.

Most of the children were gifted to people close to the dictatorship, keen to have them raised as regime loyalists.

Only about 130 have so far been found, and the search for the others – now adults in their 40s and 50s – continues.

Argentina wary of Australia's speed ahead of World Cup clash

The Grandmothers of Plaza de Mayo group was founded in 1977 by women trying to find their arrested daughters – and the babies they bore in captivity. The "abuelas" take their name from the Plaza de Mayo square in Buenos Aires where brave women held protests to demand information on the whereabouts of their loved ones. They did so in vain.

As the original grandmothers get older, the organisation has since been populated by a younger generation of researchers and councillors.

The rights body holds regular public meetings in the hopes of reaching people who may have questions about who they are – questions that can be difficult to confront – and convincing them to come forward. Those who successfully go through a verification process can have their stolen identities "restituted."

Argentina back on track in World Cup roller coaster

But it is an increasingly difficult endeavour. As time goes on, those who think they may be the children of disappeared women are ever less likely to come forward.

"They come to us in various stages of doubt, some have carried the burden in silence for 20 years, sometimes more, without talking to anyone – not even their spouse," Laura Rodríguez, coordinator of the Grandmothers' identity project, said in an interview.

Doubts can be triggered by a lack of physical resemblance to their parents, the absence of photos of their mothers while pregnant, or holes in the family history. Some make several appointments for a consultation, but never show up.

Stories that caught our eye: November 25 to December 2

Since June 2019, there have been no new restitutions, due in large part to the coronavirus pandemic putting the brakes on the Grandmothers' activities – research and interviews with potential victims.

Six of the original grandmothers also died during the pandemic.

'Leap into the unknown'

At Morón, some 40 kilometres (25 miles) from the capital, six outreach meetings are planned by the Grandmothers and Argentina's human rights ombudsman for the coming weeks.

But taking that first step is not easy.

"It is a leap into the unknown," said Guillermo Amarilla Molfino, once known as "grandchild number 98." He said it took him years to seek help and then go through the restitution process. He was reunited with his brothers, and has acted as an adviser to the Grandmothers outreach team.

"There are many fears, there is guilt, this guilt that makes us stay quiet: 'Why do I doubt my parents, why do I betray those who gave me food, a roof over my head?'" he remembers of his own experience.

"Silence can become an ally with which one lives," added Molfino. And finally accepting you are not who you thought you were can "feel like handing over your life" to someone else.

It is a difficult task for the researchers too, said Luciano Lahiteau, one of the Grandmothers team.

One needs to carefully balance an empathetic shoulder, he explained, with the "duty, not necessarily pleasant, of... picking out the reliable information from what a person tells us."

Lahiteau and other researchers take the volunteers' stories and documentation, when available, and check these against civil and hospital registers, and evidence gathered from military trials.

If evidence for a match turns up, DNA can be cross-checked with a data bank holding genetic information on many, though not all, of the families searching for a missing grandchild.

When a match is found, "it is like winning the lottery!" said Rodríguez.

But more often than not, hopes are dashed.

"We receive a lot of people who are not children of disappeared" women, said Rodríguez.

Yet, even for those who go through the process in vain, "it does a lot for identity," said Lahiteau.

"It makes it possible to recognise: 'OK, I am someone who has doubts about my identity; I have the right to try and find out where I come from," he explained.

"Really, every person comes out of the process better than they entered," added Rodríguez.

‘Finding your identity can take a lifetime’

Whether it is to finding the courage to speak up or to learning to live with a recovered identity, time is crucial for the children stolen by the officers of the 1976-1983 military dictatorship says Guillermo Amarilla Molfino, one of the roughly 130 grandchildren who have successfully discovered their truth

How did the search for identity restitution go?

The approach to the Abuelas [de Plaza de Mayo] took a long time, questions, concerns, doubts, wanting to know if I belonged to the family that had raised me or not.

It was an atmosphere of silences, of denials. I covered up those gaps, those absences, with my own stories, with imagination. For many years, until I was 20, I thought that they could be my grandparents and not my parents.

I approached the Abuelas after seeing an episode of the [TV drama] Televisión por la identidad ("Television for Identity") series that moved me very much. I identified very much with the young person in that real story made as fiction.

The first step was to do a DNA extraction to check with the National Bank of Genetic Data, but the result was negative. The DNA of my mother, Marcela Molfino, was not there because when she was kidnapped she was very recently pregnant and her family did not know about it, so they did not look for a child.

Only in 2003, in a trial [investigating the crimes of the dictatorship], a survivor said that during her captivity she found out about Marcela Molfino's pregnancy. A blood sample was taken from the Amarilla and Molfino families and a new comparison was made: the result showed 99.8 percent kinship. I was 29 years old.

How do you live with these two identities?

The DNA result gives us the answer about the real family we belong to, but it doesn't mean that one's identity has been resolved. This reconstruction of identity takes time, it requires the exercise of bonds, of memory, of being oneself.

I used to be called Martin, but now my name is Guillermo. When I was recovered I had no memory of "my Guillermo." So an active memory began to take shape.

You are currently helping and advising others in their search for identities. Do you think there is an urgency?

The first leap into the void is to approach the Abuelas with doubts. But you meet people who are prepared, with tenderness, patience, without prejudice, who listen. That's all I was missing: there was no tenderness, no preparation, no knowledge.

Now there is an urgency to look for more people because with time, it becomes more difficult for the person who has concerns. When silence sometimes becomes one's ally, it ends up being an ally and coexists. You can live with it all your life. There is an urgency because time goes by and the possibilities of reconstructing one's identity are lost.

Point by point: CFK’s defence against allegations in Vialidad case 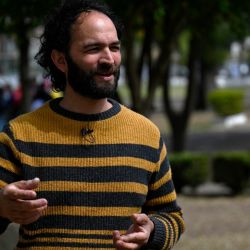