Argentines across the country rallied to remember those lost to femicide on Monday, renewing calls for justice and vowing to continue the fight against gender violence.

Demonstrators took to the streets on November 25 to mark International Day for the Elimination of Violence against Women. Promoted by the United Nations, the event invites citizens across the world to rally as part of a call to end any and all violence against women, in all its forms – from sexual violence, to rape, to femicide, the day is meant to commemorate survivors and fight for the voices of those who haven’t been heard.

In the nation's capital, Argentina’s own iteration of the '#25N' movement took violence against women as a central theme. Entitled “sexual violence is political violence” and led by the Ni Una Menos feminist movement, in conjunction with Coordinadora Feminista 8M, protesters mobilised in front of Congress, where politics also came to the fore, with many demonstrators denouncing recent "coups" across the region.

Generally, the day’s activities were more focused on the victims of femicide. Among the masses who converged on the streets between the Plaza del Congreso and Congress building, local organisations held demonstrations, workshops, and hosted tents with information on their respective causes. Activists groups ranged from family members of femicide victims to NGOs.

Women march on Congress to demand action on gender violence

“We’re here to talk a little bit about how if we don’t talk about this violence, then we can’t eliminate them because they are so deeply ingrained in the culture,” said Evelin, a Brazilian 29-year-old law student  with the Mujeres de Fé organisation.

In the tent next door, purple banners with names in white embroidered lettering hung from a fence in the Plaza de Congreso. Downed in the vibrant violet of the Ni Una Menos movement, the names represented women killed around the Buenos Aires Province area in recent years. Over 50 crosses with the names and pictures of the victims were watched over by a group known as Atravesidxs por el Femicidio, an association of family members of femicide victims.

“We help each other, we listen, support, join one another. We also help other family members in this process, of femicide and in the after,” said Eva Domínguez, a relative of Vanesa Soledad Selma of Rosario, who was killed in 2010.

Family members part of the organisation wore white aprons with the names, pictures, and locations of each woman killed. A moving image, the small plot of space they occupied in the plaza housed lit candles in honour of the victims. Alongside a group of 19 “madrinas,” Dominguez kneeled in front of the purple crosses holding each of the victims names and pictures.

“We’re here for them, and for our orphaned children.”

In perhaps the most moving part of the afternoon, the family members of murdered women came together to read out the names of their late relatives. As their names were read out, mothers, fathers, and young daughters stood by. Some hugged each other, some broke into tears as they remembered their loved ones.

“We’re here for their voices, that of the ones no longer here, those that have been silenced, the ones that were left behind by justice,” said Domínguez.

The protesters' demands are simple, but yet to be fulfilled: justice through a gender lens, an increased budget for gender issues, and for the State to take care of the family members of those killed.

“Going through a femicide, for us, is extremely hard. We suffer from Stockholm syndrome, many have died, many have committed suicide. It’s very painful, and we’re alone,” added Domínguez.

Organisations like La Casa del Encuentro, also present at the day’s demonstrations, fight for just that – the often forgotten about families who are left to care for orphaned children. Since is creation in 2008, the organisation has published annual reports on the number of femicides in Argentina per year.

In 2019 to date, there have 251, according to the organisation’s 2019 report. Of those, 288 children have been affected and/or orphaned, 72 percent of which are under the age of 18. The victims of such murders are not just the fallen.

In recent years, the government has taken steps to improve the conditions of families after a  femicide. On July 18, the Ley Brisa has officially allowed the government to provide reparations for the families of femicide victims. The law includes a monthly stipend of around 8,000 pesos per month, paid to the legal adult guardian of minors and paid directly to those between 18-21.

Despite the sombre notes of remembrance, activists and demonstrators were filled with energy for the fight.

“It’s imperative we are out on the streets at every important date, every time a femicide happens,” said volunteer lawyer Pamela Londola, protesting alongside members of La Casa del Encuentro.

The fight is clearly not over. 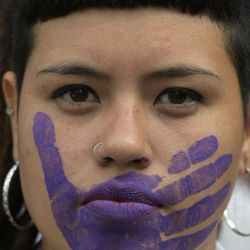 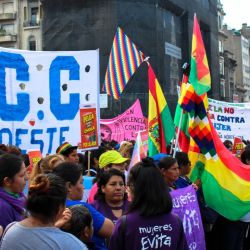 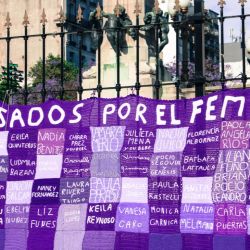 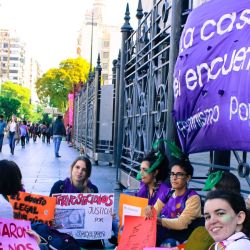 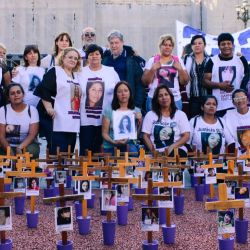