US Secretary of State Mike Pompeo announced Friday morning that Washington would offer up to US$7 million for information leading to the identification or arrest of Hezbollah operative Salman Raouf Salman, who he accused of being the mastermind behind the 1994 AMIA Jewish community centre bombing, Argentina’s worst-ever terrorist attack.

Pompeo, who arrived in Argentina late Thursday night for a whistlestop visit, revealed the news in opening remarks delivered at the Second Hemisphere Ministerial Conference on the Fight Against Terrorism in Buenos Aires, which comes on the 25th anniversary of the bombing.

The US official also announced targeted sanctions against Salman, which “denies him access to the United States financial system,” and said Washington would blacklist him as a Specially Designated Global Terrorist.

Pompeo accused Salman, who reportedly has joint Lebanese and Colombian citizenship, of serving “ as the on-the-ground coordinator for the AMIA bombing.” He said the operative “continues plotting terrorism on behalf of Hezbollah.”

The announcement comes just one day after Argentina designated Hezbollah a terrorist organisation – a measure Secretary Pompeo commended during his remarks. The move imposes sanctions against the organisation, freezing its assets.

Salman arrived in Argentina in 1989 using the false identity “Salman El Reda” and married an Argentine of Lebanese descent. In 2009, he was identified in a report by late AMIA special prosecutor Alberto Nisman as the alleged primary organiser of the 1994 bombing, which left 85 people dead and more than 300 injured.

More broadly, the US Secretary of State said that in April the United States designated Iran’s Revolutionary Guard Corp as a “foreign terrorist organisation.”

“This was the first time we have ever designated part of a foreign government as an FTO,” Pompeo declared.

In Washington, the Trump administration said the move was part of their campaign of "maximum pressure" on Tehran. The Trump administration has taken a hard line stance against Iran compared to its predecessor, pulling out of the Nuclear Treaty negotiated under Obama and even coming within seconds of a direct attack.

Iran is the primary sponsor of Hezbollah, a Shiite Muslim militant movement.

In Buenos Aires, Pompeo reiterated that in April the US State Department had offered up to US$10 million for information leading to the “disruption of Hezbollah financing.”

“This is all part of our broader effort to hit Hezbollah in the wallet… We’ve imposed historic sanctions aimed at squeezing it out of the global financial system,” he explained, calling on other nations to follow the lead of the US and Argentina in combating Hezbollah.

“In the face of a global threat like Hezbollah, it is every sovereign nation’s obligation and responsibility to comply with sanctions designed to keep all of us safe,” he said.

Continuing the theme, he commended Paraguay for extradicting Hezbollah operative Nader Mohamad Farhat to the US to face federal money-laundering charges.

Pompeo is due to hold a press conference at 3pm this afternoon, before heading on to a meeting with President Mauricio Macri at the Olivos presidential residence.

The threat of terror

Earlier on Friday morning, Pompeo participated in a memorial service for the victims of the AMIA bombing alongside Foreign Minister Jorgie Faurie and AMIA Acting President Ariel Eichbaum, a day after the 25th anniversary of the attack.

In his later remarks he said the anniversary of the bombing was a reminder that “our discussion today isn’t abstract. It isn’t theoretical. The risk from terrorism is real.”

The need for hemispheric cooperation was repeatedly emphasised in Pompeo’s speech.

“Protecting our individual countries requires protecting the entire region,” he declared to foreign ministers and representatives from 18 countries in the region.

In Pompeo’s speech, as well in addresses delivered by Foreign Minister Jorge Faurie and Security Minister Patricia Bullrich, the imminence of the terror threat was a primary theme.

Faurie said that before the attacks on the Israeli Embassy in 1992 and the 1994 bombing of the Argentine Israelite Mutual Association centre, Argentina saw terrorism as a distant danger that only happened in other countries.

“We thought we were safe because we were not involved in geopolitical conflict,” he said, adding that by the time they got the “wake up call,” it was too late.

Pompeo echoed the perils of dismissing terrorism as distant saying “the roots of these terror groups may be many miles away, but their branches twist around the globe.”

In her remarks, Bullrich highlighted the ability of terrorist organisations to use new technology like social media, the threat of “narco-terrorism” and terrorism by organised crime groups.

“We must remain vigilant every day at all times,” she said adding “If terrorism is part of organised crime, we will organise even better.”

In an effort to “organise” Bullrich said it was crucial that states also use cutting-edge technology to fight terrorism like biometrics.

Pompeo concluded on an optimistic note, declaring that “the United States is proud to be with you all here today.”

He added: “We are here to stay [and] we look forward to the progress that I know lies ahead.”

Victims of 1994 AMIA bombing still waiting for justice, 25 years on

'We seek justice for a crime that should never be forgotten' 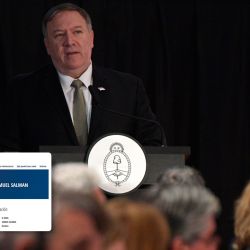 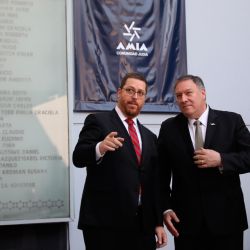 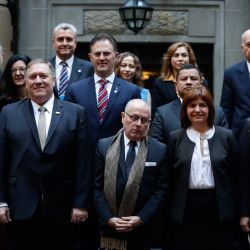 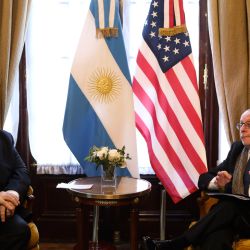