It is no secret that Argentina is a country where meat and dairy produce are heavily consumed. According to a Perfil article in 2021, the World Health Organization said that each citizen in the country ate an average 46.1 kilos of beef, 45.2kg of chicken and 14.6kg of pork.

But while meat is a key component of the Argentine diet, its consumption has actually decreased  in the last few decades, according to the Cámara de la Industria y Comercio de Carnes y Derivados de la República Argentina (Chamber of Industry and Commerce of Meat and Derivatives of the Argentine Republic).

And in the past few years, veganism has exploded in Argentina – especially in Buenos Aires.

Stories that caught our eye: September 23 to 30

Among the top reasons for eliminating meat from one’s diet are animal welfare, environmental reasons, and attempting to live a healthier lifestyle. Today one can find one or two vegetarian or vegan options at most restaurants in the capital, but it wasn’t always so easy.

Verónica Cerrato, an animal rights activist for 32 years and owner of Veganius in Palermo, explains how hard it was to even be accepted as a vegan.

“At 20 years old, when I told my parents I was going to stop eating animals, they wanted to seriously take me to see a psychiatrist!” she told the Times. “Thirty-two years ago, in this country, no-one even talked about vegetarianism; they thought you were crazy.”

Matías Aime, the owner of Spika Lion, a store with meat and dairy alternatives, has been a witness to the growth of the vegan community in the capital.

Starting a vegan business in Argentina a few years ago was not an easy task, he recalls, citing a lack of plant-based products to work with and sell to consumers. It was a job that required much patience and effort.

“At first it was very difficult because there were many vegan products that were available in other countries and not in Argentina,” he said in an interview.

“It was much easier to find vegetarian options but vegan options you could not find anywhere. I started small and luckily, with time, I have been able to sell a variety of products.

“At first people looked at the business a bit weirdly. They came in, looked, and left. On the other hand there were vegetarians and vegans who walked by the business and started applauding me.

“I was surprised. To me, it felt like I was doing something small, but other people saw it as something huge.”

What was it that caused this boom of veganism in Argentina? Many herbivorous humans credit greater access to information on the Internet, especially on social media.

It is certainly more common to find younger generations taking the life-changing decision to commit to a plant-based diet. According to a survey carried out by the Unión Vegana Argentina (Argentine Vegan Union, UVA), of the vegan and vegetarian population 52 percent are female, 48 percent are male, and nearly 40 percent are under 35 years old.

“There are more vegan people who are young because the younger people have a greater access to videos and documentaries that we, the older generation, did not have,” Cerrato explained. “Anyone with a computer can easily see the reality of things and make the decision to not eat [animals].”

This was the case for Catalina Fávaro, 21, a vegan of three years who lives in Buenos Aires.

“In 2018 I started consuming the content of [Argentine Singer] Co Isla and from one day to the next I started to feel disgusted by meat, so I gave it up. With dairy it was more difficult, since I consumed too much and was mainly a fan of cheese, but I think the key is to change your thinking first, to inform yourself, and when you feel mentally ready to take the step.”

For others, the climate crisis is also playing its part. Hugo Daniel Carrión, an expert in Criminal Law and Animal Rights, offered the Times his professional perspective as to why more people are turning to this lifestyle.

“We now know that we are at environmental risk and we have an urgent need to save the planet and veganism is the solution,” said the lawyer.

For Carrión, mass adoption of veganism would lead to a “revolution” that could help humans in the fight against climate change.

“A single kilo of meat implies the indiscriminate use of 15,000 litres of water, as the FAO [United Nations Food and Agriculture Organization] has said, and if all the grain that is used to feed all these animals is used in human nutrition, the entire population of the Earth could be fed twice,” he added.

“I insist, veganism is the greatest revolution, because it implies not only taking care of the planet but also being fair to the most disadvantaged in emerging countries.”

Furthermore, health benefits are another strong reason as to why more people are beginning to eliminate meat and dairy products from their diet. Making this change can reduce one’s risk of prostate cancer by 35 percent, according to a study commissioned by VegWorld Magazine.

Senior author Professor Qi Sun, a nutritionist at the Harvard T.H. Chan School of Public Health previously told Britain’s Telegraph newspaper that this type of diet can decrease Type 2 diabetes by as much as 23 percent.

As for the city’s vegan restaurants, businesses are looking to expand their customer base, targeting meat eaters to continue growing the plant-based community. Any new establishment, after all, must first be profitable.

Matías Perucho, the owner of the Palermo branch of international vegan franchise LovingHut, lists three important points to consider when opening a plant based restaurant.

“The most important thing is that you make a delicious meal,” he told the Times. “When you eat well, but I mean really well, you don't care so much if it's vegan or not. When they [customers] find out that the dish is vegan, they are surprised.”

Accessibility, said Perucho, is also key: “Make delicious food and don't make anything expensive. When veganism began, many people believed that it was a diet for the elite, and that is a lie.”

Twists on the local diet can also pay off, he adds. “A good opening point is that you make a typical meal from your region. If you go too far from the diet that the local people are consuming on a daily basis, it is very difficult for you to make your food popular.”

Cerrato has similar opinions, though she also deploys an extra technique before launching a new meal on the menu.

“When we make a new product we have non-vegans try it. And until they tell us that they like it and that they could switch their traditional food to this, we don’t launch it into the market. It has to be liked by people who are not vegan,” she revealed.

In more recent years, eating a plant-based diet has become more accessible to porteños, not only when dining out at restaurants but shopping at supermarkets.

“Clearly it is much easier. Nowadays vegan products are not only found at dietetics, even big brand supermarkets sell them. This is a huge step and long desired by all, plus there is a wide variety of products: from the most homemade and healthy to those that try to imitate the flavour and texture of cheese or meat burgers,” Fávaro told the Times.

NotCo is a popular brand found internationally at markets that makes vegan alternative foods for products such as milk and burger patties. On the NotCo website, Chilean founders, Karim Pichara and Matías Muchnick, explain in a video that Artificial Intelligence helps in the creation of their products.

“Giuseppe is an artificial intelligence that works together with humans to find plant-based recipes that recreate the animal-based products. There are different sources of information that are fed back into Giuseppe databases. Information such as flavour, texture, images or scientific data that is being screened at the NotLab everyday. Giuseppe is helping in every single step of that product creation pipeline. Working together with the food scientists and chefs at the NotLab,” Pichara says in the video.

Although finding meat alternatives are easier to find now than before, that doesn’t mean that it is always a cheap find. While there might be affordable local restaurants to dine out at, there are also your upscale vegan restaurants that aren’t quite so budget friendly.

Chuí, a vegetarian restaurant with plenty of vegan options, opened in early 2021. With a leafy patio, and many trees and plants as decor, customers can choose from a wide menu. Last year, their entrees priced around ARS$1,000, with their priciest dish being ARS$1,350 (2021).

Mudra, is a pricier upscale plant-based restaurant, has two locations in Buenos Aires. Their menu, selected by US celebrity chef, offers comfort food stretching up to ARS$2,000.

With more Argentines looking to make the change and adopt a plant-eating lifestyle, it is important to consider doing so in a safe and healthy manner. A vegan diet is not only eliminating all animal products, but knowing how to substitute them appropriately. Experts say that consulting with a nutritionist if possible is a good way to gain a greater understanding on how to transition to a plant-based diet.

Camila Monte, a plant-based nutritionist in Buenos Aires, underlines the importance of ensuring adopters get the correct nutrients and vitamins when switching to a new diet. Her goal is to teach clients how to learn to eat a plant-based diet they are able to maintain over time.

“It’s always important to consult a professional, especially if you are making a big change in your diet. Not because it’s bad but because it’s different, and when one eats differently they need to know how to do so,” she explained in an interview.

“With a vegan diet, when done properly, you should not get sick. What you will have to take is a B12 vitamin that is not in plants. So what you will need is to consume a supplement and take a regular dosage. But it’s not something that is a big deal – it’s often a vitamin you take at least once a week and that’s all. It’s important to note that animals themselves also don’t carry that much of that vitamin either,” added Monte.

With information on veganism becoming more readily available to the public, more Argentines are already making the choice to change their lifestyle. The community – in Buenos Aires and beyond – is growing, and there is seemingly no stopping those fighting for animal rights.

“That's why I work every day,” Perucho says. “It's not the money that motivates me to do this. If I didn't expect the world to be vegan, I don't know if I would dedicate myself to this.” 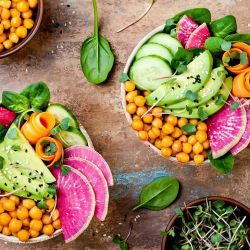 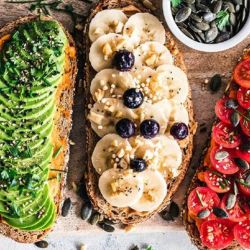 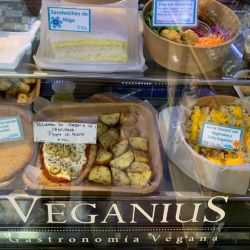