Argentina is facing a dilemma over the future of its lithium. President Alberto Fernández and his government want to boost the sector’s development, and for the state to play a prominent role in both the extraction of the mineral and the development of batteries for electric vehicles (EVs). However, social and environmental tensions over such ambitions remain.

The government’s desire for expansion has an international dimension. Globally, the transportation sector is estimated to be responsible for nearly a quarter of CO2 emissions, and moving away from combustion engines in favour of EVs is seen as a prerequisite for the energy transition. This is where lithium plays a central role as a key mineral – and one that Argentina has an abundance of.

The salt flats of Argentina, Bolivia and Chile account for almost 60 percent of global lithium resources. Argentina is home to nine percent of the world’s total reserves – resources whose exploitation has been proven to be viable in technical and economic terms – and these are the third-largest behind Chile and Australia.

There are currently two projects producing lithium for export in Argentina. On the Salar del Hombre Muerto salt flat in the northwestern province of Catamarca, the US company Livent, now associated with BMW, has a production capacity of 20,000 tonnes of lithium equivalent per year, and plans to double this with an investment of US$640 million.

The second project is Sales de Jujuy in the Salar de Olaroz flats of Jujuy Province, with a capacity of 17,500 tonnes of lithium per year. It is managed by Australia’s Orocobre, in partnership with Japan’s Toyota Tsusho and the provincial company Jujuy Energía y Minería Sociedad del Estado (JEMSE). Sales de Jujuy sells lithium to Toyota in Japan and to other battery manufacturers in Korea and China.

The only project currently in the pipeline is Caucharí-Olaroz, also in Jujuy Province, operated by Minera Exar and co-owned by the Canadian company Lithium Americas and China’s Ganfeng Lithium, with JEMSE holding a minority stake. Production is due to start next year and, once construction is complete, it will have a capacity of 25,000 tonnes of lithium carbonate per year. Caucharí-Olaroz has contracts with Tesla, Volkswagen and BMW.

According to official figures from Argentina’s Mining Secretariat, 31,500 tonnes of lithium carbonate were exported last year for US$134 million, down from US$184 million in 2019. With full production from Caucharí-Olaroz, the country’s total capacity would increase from the current 37,500 tonnes per year to 85,000 tonnes.

Elsewhere, the French company Eramet has seen its project at the Salar de Centenario-Ratones flats in Salta Province stalled by the pandemic and Argentina’s broader economic uncertainty. Working in the same vein are the South Korean firm Posco, which plans to build a lithium carbonate and hydroxide plant in Salta, and the Australian companies Galaxy and Orocobre’s investment in Catamarca.

Practically all the concessions to salt flats in Argentina are in the hands of between 50 and 60 firms. Martín Obaya, a researcher at the National University of General San Martín, argues that the regulatory framework for mining activity favours speculation on such projects, with companies buying a concession but then selling it to obtain income.

Argentina’s mining investment law and its mining code, which regulate lithium activity, allow for duty-free imports of equipment, include tax breaks and fiscal stability, and establishes royalties of just three percent for exports. It does not establish mechanisms for dialogue with communities, nor does it include tools to advance value addition.

The situation is different in Chile and Bolivia, where lithium is considered a strategic resource. In Chile, private companies operate under contracts with the state, with flexible royalties of between six and 40 percent paid, and resources are earmarked to finance research centres. Meanwhile in Bolivia, the system is public and pilot projects have been developed but are not yet at the industrial phase. 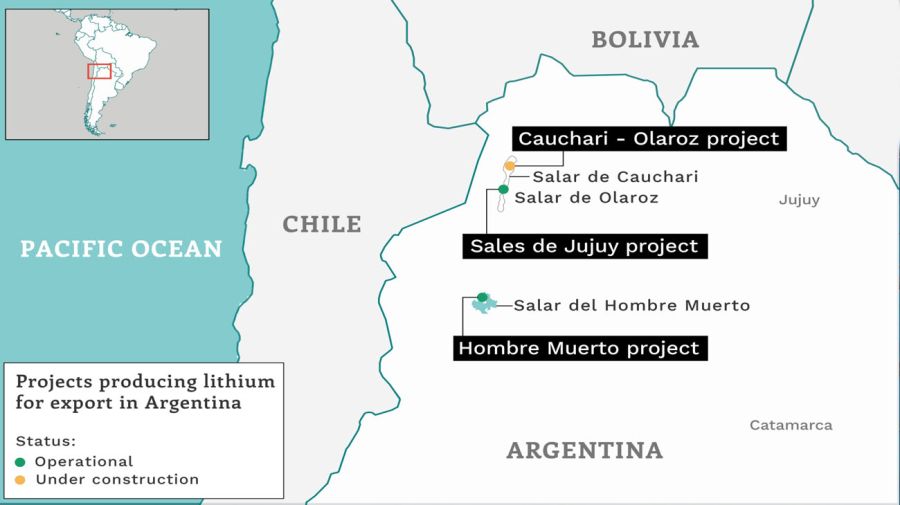 In a contested field, one area in which conflicts can arise is over water. “Lithium mining competes for a critical resource such as water, as these [salt flats] are areas of extreme aridity,” explains María Laura Castillo Díaz of the Fundación Ambiente y Recursos Naturales (FARN). “The little fresh water that is available is underground and is a basic resource for communities and biodiversity.”

To extract the mineral from the ground, the companies drill a well between 200 to 400 metres deep to extract water along with minerals. The liquid is then left to stand for one to two years in huge pools, from which the water evaporates due to solar energy. The resulting compound thus requires large quantities of fresh water in order to form lithium carbonate.

In the Olaroz salt flat and in Catamarca, the lithium sector is advancing, despite some tension with surrounding communities. This is not the case, however, in Salinas Grandes, a basin straddling Salta and Jujuy provinces, and in which 33 different communities live. Several exploratory projects have been halted here due to conflicts, and as a result there is practically no active business presence at this moment in time.

Alicia Chalabe, a lawyer for these communities of Salinas Grandes, describes how they are “organised” and that “conflict will continue to exist as long as indigenous rights are not recognised.” She adds that “provincial legislation does not contemplate the right to prior consultation. The communities are not properly informed, nor are they asked for their consent in cases where biodiversity conditions are affected.”

The communities’ claim is based on the International Labour Organization’s (ILO) Convention 169, which concerns the protection of indigenous and tribal peoples’ lands, and which has been ratified by Argentine law. The Escazú Agreement, the first environmental treaty in Latin America and the Caribbean, is also in force, and establishes regional standards for environmental access rights.

However, with demand for lithium expected to soar, legal conflict over these lands and resources may intensify – particularly given inefficiencies in the lithium extraction process. As Ernesto Calvo, director of the Instituto de Química Física de los Materiales, Medio Ambiente y Energía (INQUIMAE) at the University of Buenos Aires, explains: “The current method of lithium extraction is not sustainable because of the volume of water it requires and the waste it generates. It is also very inefficient in economic terms, which means that it will not be able to meet the 35-fold increase in demand that is expected in a scenario where electric vehicles become widespread.”

Calvo himself and his team have developed a new extraction method that is competing with projects from companies and governments around the world to reach an industrial scale. “Sooner or later there will be a technological change in favour of a more efficient, cost-effective and environmentally friendly direct extraction method,” he told Diálogo Chino.

Alberto Fernández’s government is studying a bill that aims to consolidate a public company for lithium production, along with a self-sufficient and comprehensive commission that would function across scientific, technical, commercial and industrial levels. The commission would invite the participation of the national and provincial governments, indigenous communities and universities. It would also facilitate a new agency aimed at stimulating scientific development in lithium.

Sources among pro-government deputies argue that this new public entity should resemble YPF, the national oil company, but highlight that the concessions of salt flats represent a problem in this regard.

Federico Nacif, a lithium specialist at the National Scientific and Technical Research Council (CONICET), says that “the first thing that should be regulated are the projects that are currently underway. In any case, the plans to produce lithium with a state-owned company could take effect in eight years’ time.”

Nacif and other specialists argue that lithium should be removed from the scope of Argentina’s mining investment law and declared a strategic resource. But as a federalised country, in which provinces have control over their resources, moving in that direction would entail considerable political conflict.

In the short term, the government is expected to send a bill to Congress to promote electromobility. The details are not yet known, but it would seek to encourage the industrialisation of lithium, as well as the manufacture of EVs with domestically made components, and expanding the market for sales of these new models.

To this end, Jujuy Province and the national government signed a memorandum of understanding (MOU) with Ganfeng Lithium to study the installation of a lithium battery factory, while the national government agreed a further MOU with another Chinese company, Jiangsu Jiankang Automobile, to produce urban EVs and batteries in Argentina.

The promotion of electromobility is a bone of contention with car manufacturers, who warn that the possibility of mass production of EVs in the country is remote, as Brazil, the main buyer, does not seem to be transitioning towards electric cars but hybrids, in order to take advantage of their large resources of ethanol as a fuel.

In addition, carmakers argue that the Argentine industry specialises in the manufacture of utility vehicles, which do not adapt well to current electric technology given their power and range requirements. They are therefore pushing for the first step to be support for hybrids that combine petrol or gas with electricity.

In the short term, the market for EVs could open up in public transport and by importing certain vehicles for urban use. Chinese companies appear to be the only actors capable of setting up factories, but questions arise as to the degree that these will link with and benefit local industry.

* This article is reproduced with kind permission from the publishers. For more, visit dialogochino.net

Lithium nationalism is taking root in region with most resources 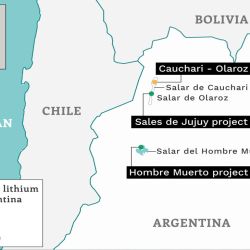 Javier Lewkowicz is an Argentine journalist who writes on China and the environment. He writes on Página/12 and Diálogo Chino, among others.