Less than a month after Argentina’s US$65-billion debt restructuring, bond prices show growing concern the government may struggle to pay its obligations.

The country’s yield curve has inverted in the week since officials announced foreign-exchange restrictions to help conserve cash. Investors perceived the move as an act of desperation instead of a workable solution to stem the drain in foreign reserves, and prices for short-term bonds dropped.

Angst is growing just three weeks after creditors reached a deal to cut interest rates and push back maturities, with the promise that the restructuring would stabilise Argentina’s finances after the country’s third default of the past 20 years.

“This reflects the already very high perceived chance of another default down the road,” said Pablo Waldman, head of strategy at StoneX Argentina. “Sophisticated traders are shorting the more liquid short end of the curve to hedge their exposure to longer-dated and harder-to-sell securities.”

Longer-term yields have fallen below shorter-term yields on Argentina’s dollar bonds issued both locally and abroad. That’s the opposite of how yield curves look in most countries, where securities with a longer time horizon are perceived to carry more risk. 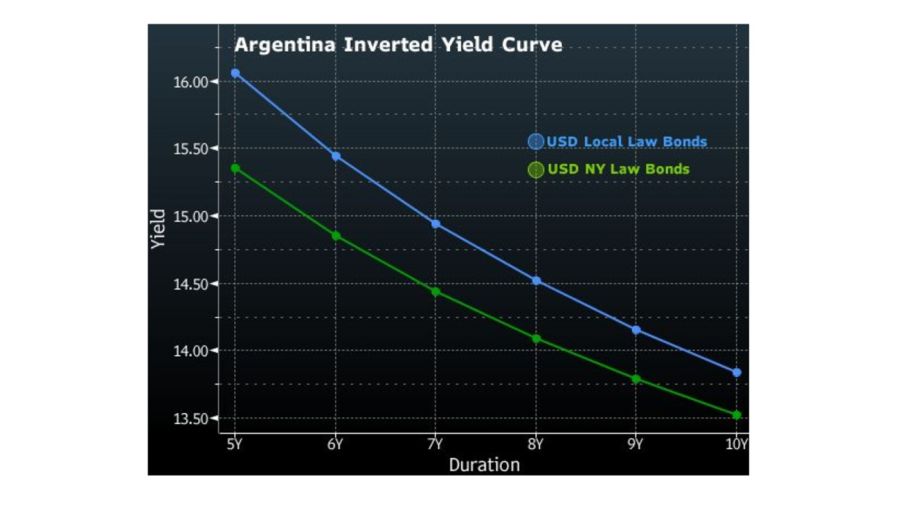 In Argentina, international bonds maturing in 2030 are trading with a 15 percent yield to convention, while those due in 2041 trade at a 13.6 percent yield, according to data compiled by Bloomberg.

The latest leg down for the notes came after the government expanded restrictions on buying dollars in a bid to conserve cash. Net international reserves have dropped to about US$5.5 billion, according to estimates by Portfolio Personal Inversiones, with the economy is in its third year of recession.

Investors are concerned reserves could be tapped out by the time payments come due, according to Alejo Costa, chief Argentina strategist at BTG Pactual in Buenos Aires. He estimates a 90 percent chance of default over the next decade.

“That’s the problem with unsustainable policies,” he said. “The country can still adjust its policies, but so far nothing indicates the government will do so in the short term.”

Argentina, trying to sit at the ‘big boys’ table’