No country on Earth puts more breakfasts on kitchen tables than Brazil.

The farms that dot the vast plains and highlands that rise above the Atlantic coast produce four-fifths of the world’s orange juice exports, half of its sugar exports, a third of coffee exports and a third of the soy and corn used to feed egg-laying hens and other livestock.

So when the region’s crops were scorched and then frozen this year by a devastating one-two punch fueled by climate change — the worst drought in a century followed by an unprecedented Antarctic front that repeatedly coated the land in thick frost — global commodity markets shook.

The cost of Arabica beans soared 30 percent over a six-day stretch in late July; orange juice jumped 20 percent in three weeks; and sugar hit a four-year high in August.

The price spikes are contributing to a surge in international food inflation – a United Nations index has jumped 33 percent over the past 12 months – that’s deepening financial hardship in the pandemic and forcing millions of lower-income families to scale back grocery purchases across the globe. What’s more, the episode is sending an ominous warning of what’s to come as scientists anticipate rising global temperatures and declining soil humidity will increasingly wreak havoc on farm lands in Brazil – and much of the rest of the world.

“It’s been a very peculiar year,” he says. “Floods in Germany and China, and there’s a very serious drought problem in Brazil.”

There’s also drought across the border in Argentina and in Chile, Canada, Madagascar, Mexico and Russia. The United States has been cleaved in two this summer: The West has been ravaged by record heat waves, forest fires and a drought so severe that, like in Brazil, giant lakes and rivers are drying up and straining hydro-electric power; the East, meanwhile, has been drenched by record-setting tropical storms and deadly floods.

“The world is on a very dangerous path,” Seluchi says.

All of this, according to a recent study published in the Journal of Environmental Economics and Management, will lead to a 10 percent decline in crop yields over the next three decades, a period in which the global population is expected to grow more than one-fifth.

The destruction wrought in Brazil provides a glimpse of that future. Between the drought and the frost, crops on some 1.5 million square kilometres of land have been damaged — an area the size of Peru. The coffee losses are the most stunning: as much as 1.3 billion pounds of beans destroyed, enough to brew every single cup that Americans drink over a four-month period.

This has triggered a frantic rush among the world’s biggest coffee retailers — companies like Starbucks Corp and Nestle SA — to secure supplies.

“These guys are scrambling pretty hard,” says Jack Scoville, a trader at commodities broker Price Futures Group in Chicago. Starbucks said in a statement that it always buys months in advance, and Mark Schneider, Nestle’s CEO, told investors on a July conference call that the company protected its finances by purchasing hedging contracts that stretch into early next year.

Scoville, though, warned that successfully locking in prices isn’t the same as getting enough coffee over the long term. Brazil’s poor harvest will roil the market for years, he predicts. He’s seeing buyers who normally get all of their beans from Brazil and Vietnam suddenly turn elsewhere to try to make up for shortfalls.

That’s exactly the situation that Bader Olabi, a roaster in Istanbul, finds himself in. He's hunting for new suppliers in Colombia, India and Africa to replace the 100 containers of beans he gets from Brazil each year. He knows it won’t be easy to convince customers that those coffees are just as good. In Turkey, Olabi says, “Brazilian coffee is the best.”

In Austin, Texas, Greater Goods Coffee Co, a specialty roaster, is planning to raise prices soon to offset the higher cost it had to pay for beans. Sara Gibson, the head roaster, calls it a wake-up call to customers. They’ll have to accept higher bills to help make farming more sustainable in the era of climate change, she says. “That’s my hill to die on.”

Brazil is now predicting its coffee crop will shrink by more than 25 percent this year. Ground zero for this wipeout was Caconde, a hamlet carved out of the lush hardwood forests of northwestern São Paulo state.

Coffee is 80 percent of the economy here. Stand on top of the highest peak and it’s coffee farms as far as the eye can see. One of them is a tidy, little plot owned by a 70-year-old former banker by the name of Antonio Ribeiro Goulart.

Goulart lost it all when the frost hit.

The leaves on every single tree he has — some 11,000 in all — went from a vibrant green to a dull brown in the span of 24 hours. One month later, he still seemed in a state of shock. He kept running his hands slowly through the dead branches as he talked. The leaves would crackle and then crumble into tiny pieces. “They were completely spectacular before the frost,” he says softly.

Goulart’s family has owned this plot for over a century. He inherited it from his father and settled in after spending some three decades at Banco Bradesco. He was a mid-level sort there, tasked with running a branch in downtown São Paulo when he retired ten years ago.

'Back in 2019, he had pledged a portion of this year’s crop to a supplier that sold him a new husking machine, but that was impossible now. There will be no harvest for Goulart this year or next. Even 2023 is almost certainly lost. He will call the supplier and renegotiate the terms, he said. And then, like thousands of farmers around him, he will lop off all the branches on all the trees in the hope that the trunks sprout new shoots. If they do not, as he fears, he will cut them down to the stump and start from zero.

“There is no other solution,” he says.

Goulart may have loved the way his trees looked before the polar winds swept through, but the truth is the harvest in Caconde was already weak. The drought, which is now in its seventh month, was far too harsh to produce a good crop. Soil humidity was down to a mere 20 percent. Ideally, that number would be closer to 60 percent, says Ademar Pereira, the head of the local coffee growers’ association.

Pereira is standing on top of a bluff and pointing out all the tell-tale signs of the bone-dry weather: the manicured lawns that have turned into brown carpets; the gash that a recent wildfire left in a far-off mountain; and the hydroelectric reservoir down in the valley that is so low that marinas that were built right on the water’s edge now stand a quarter-mile away.

When you tally up the accumulated rain shortfall over the past decade across many basins in Brazil, it comes to about a year’s worth of precipitation, according to ONS, the national electrical grid operator. The monsoons that farmers rely on have been arriving later and later each year. The United Nations’ Intergovernmental Panel on Climate Change predicts this trend will worsen in coming years, with longer dry seasons stretching from central Brazil up into the Amazon.

It was along the outer edge of the rain forest, in a town called Nova Mutum, that Cleverson Bertamoni saw his corn fields go up in smoke one July day.

Bertamoni frantically piled farm hands into his two water trucks and sent them out to douse the fire. Still, it raged on. Bertamoni pleaded for help. His neighbours rushed over 13 more trucks. By the time the flames were finally out, some six hours later, almost 250 acres had been destroyed.

For Bertamoni, 43, it was unlike any fire he’s ever encountered in a career that began when he was a young boy following his parents into their soybean and corn fields. The ground is so dry now, he said, that a simple spark from a combine was enough to trigger the blaze. "It spread so fast."

Bertamoni suddenly found himself 16,000 bags of corn short of what he had promised to deliver to trading houses in São Paulo. The contract stipulated he had to fork over US$120,000 to make up the difference. This wouldn’t work. He didn’t have that kind of cash. So he brokered a deal with them: He’d turn over 20,000 bags from next year’s harvest instead.

Bertamoni is relieved, albeit a bit edgy. It should all work out fine, he figures, just as long as the rains come and he can keep the fires at bay. 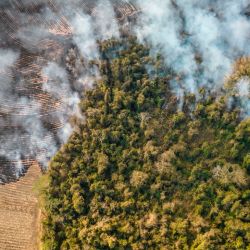 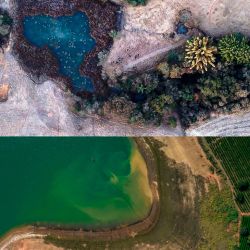 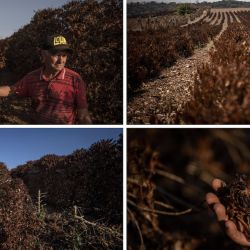 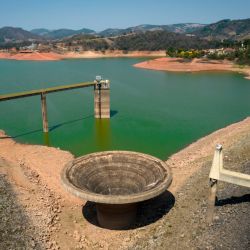 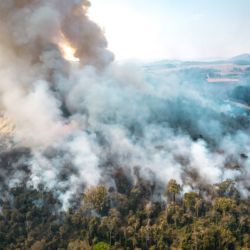