Latin America and the Caribbean, the region where the coronavirus caused the worst economic destruction and more than a quarter of the world’s deaths, is now falling victim to a slow inoculation campaign.

Such sluggishness alongside a recent spike in infections risks hampering an already slow going economic recovery.

Latin America’s economic rebound was already wobbling after a new round of lockdown measures in response to the surge in cases that began around the Christmas holidays. Since January, JPMorgan Chase & Co trimmed its first quarter growth forecasts for Argentina, Brazil, Chile, Colombia and Mexico, citing concerns of rising case load and new restrictions.

The region contracted by more than seven percent last year, according to the IMF, the most in the world. The Fund doesn’t see output returning to pre-pandemic levels until 2023, and this year is off to rocky start.

In December, Brazilian retail sales suffered their biggest drop for the month on record, pointing to a sharp slowdown in Latin America’s largest economy. Meanwhile, Mexico saw its recovery lose steam, as growth slowed to 3.1 percent from 12.1 percent over the last two quarters of 2020. 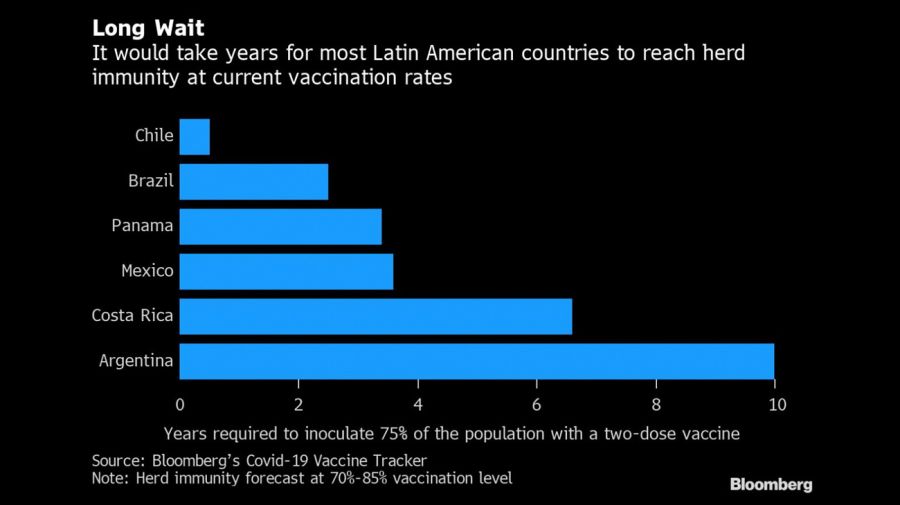 Activity is expected to pick up later this year, but a strong rebound depends on vaccines becoming more widely available in the coming months. Underscoring the importance of an efficient vaccine rollout, investors are already rewarding Latin America’s only success story so far: Chile, which is on pace to inoculate 75 percent of its population in just six months, according to Bloomberg’s Vaccine Tracker.

This month, Moody’s Investors Service and Spain’s Banco Santander both revised upward their growth forecasts for Chile, setting it apart from its neighbours. Its economy will recover pre-pandemic levels three to six months earlier than most other countries in the region, according to Nikhil Sanghani, an economist at Capital Economics in London.

The Chilean peso has led gains among regional peers, rallying more than three percent so far this month.

Other countries in the region are nowhere close. At the current rate, Brazil would take two-and-a-half years to reach the 75 percent level of inoculation, which is the threshold experts say is needed for a return to normality. Mexico 3.6 years and Argentina would take over a decade. The United States, in contrast, is projected to reach herd immunity by the end of the year.

This outlook may improve over the next few weeks as some of the “teething problems” with the vaccine rollout start to ease, Sanghani said.

Delays in deliveries have sent countries that relied heavily on particular vaccines, such as Mexico and Colombia, running to ink last-minute contracts with competitors. Argentina is trying to produce more locally.

After dragging its feet for months in making orders, the administration of Brazilian President Jair Bolsonaro is running out of doses to sustain its vaccination campaign, leading nine state capitals including Rio de Janeiro to suspend immunisations. 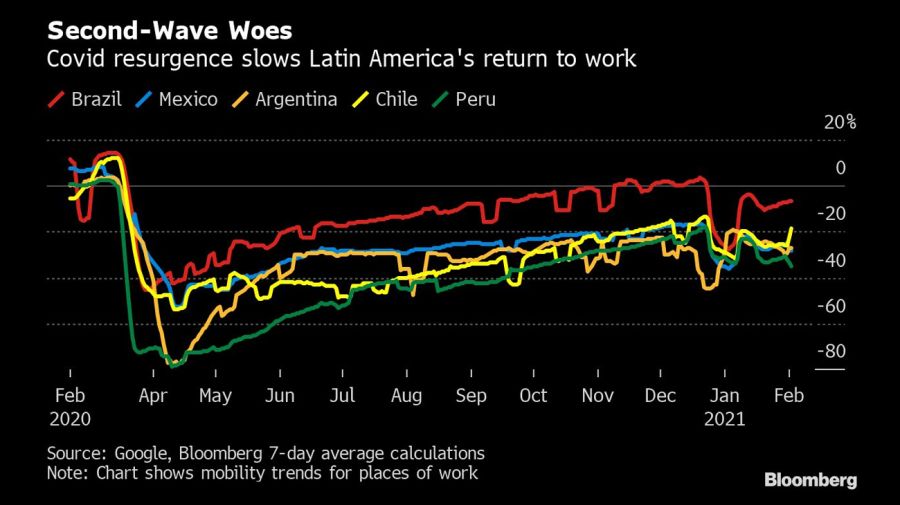 The hold ups in the vaccination drive aren’t all self-inflicted.

From the start, poorer countries have been pushed to the back of the line by wealthier ones that quickly sealed deals with drug makers, or are now commandeering vaccinations produced in their territory for their own citizens.

Much of the Caribbean and Central America are still weeks away from kicking off their campaigns. Jamaica’s Prime Minister Andrew Holness last month accused rich countries of “hoarding” vaccines.

Economists watching mobility trends are bracing for another hit to activity caused by people once again sheltering at home and businesses closing shop. Chile aside, they remain sceptical about restrictions relief for the rest of the region given their slow start and distance from major vaccine distributors.

“Richer countries already started to buy out everything they could, only leaving bread crumbs for the rest,” said Joan Domene, a Mexico City-based economist for Oxford Economics Ltd.

From impending catastrophe to moderately optimistic?

Sense and the census