Thousands of followers of President Nicolás Maduro marched in Caracas on Tuesday to protest Argentina’s retention of a Venezuelan freight plane since June.
Placards reading ‘#DevuelvanElAvión’ (“Give back the plane”) were brandished by the demonstrators, many of them from the Conviasa state airline, the owner of the Boeing 747 of its subsidiary Emtrasur and the target of United States sanctions.

"Yankee thieves, give back our plane!" repeated the demonstrators at a downtown demonstration in the Venezuelan capital.

The aircraft was retained on June 8 on the orders of a court which then opened up an investigation into the crew consisting of 14 Venezuelans and five Iranians. Early this month the judge handling the case permitted the exit of 12 of the crew. Weeks afterwards a US court requested the confiscation of the aircraft from Argentina, arguing that it "broke [US] laws" when sold by Iran to Venezuela.

The entry of the United States into the case triggered the condemnation of Maduro, who ordered a team of "experts" to travel to Argentina to "do battle for Venezuela."

Experts: Lula must fight for centre to win Brazil run-off

"This is an anti-imperialistic march to demand that the empire gives us back our assets, fighting against their double standards of saying that they do everything for democracy when the result is that they rob countries and peoples," demonstrator Carolina Carrero, 47, told AFP.

"We’re marching to reclaim the aircraft which was grabbed by the North American empire," expressed Juan Méndez, 56, with a placard reading ‘#DevuelvanElAvión.’

The Boeing 747 entered Argentina on June 6 with a cargo of auto parts from Mexico. Without being able to refuel in Buenos Aires, it set out for Montevideo on June 8 but the Uruguayan authorities denied it access and it had to return to Ezeiza Airport, where it has remained until now.

"That is a judicial system on its knees" to the United States, blasted Congress Speaker Jorge Rodríguez to parliamentarians, "what is happening is a vulgar hijacking of a plane."

The march also demanded that the Bank of England unblock over US$1.9 billion of Venezuelan gold, which is locked in a judicial dispute in London. The slogan ‘#DevuelvanElOro’ (“Give back the gold”) also appeared on placards.

On Monday, Maduro slammed Argentina's justice system for its move to ground the plane.

"They want to seize a plane in Argentina because of a decision of a court in Florida. In other words, from now on a court in Florida or New York decides to take a boat, a plane or any property from Venezuela or any country and can do so," Maduro said.

Maduro said the aircraft is a "Venezuelan asset" and that it has the "ownership papers” to prove it.

The United States asked Argentina Tuesday to seize the Boeing 747 cargo plane, which has been stuck at a Buenos Aires airport since it arrived back after having tried unsuccessfully to enter Uruguay.

On July 19, a US court in the District of Columbia issued an order to seize the plane on the grounds that US "export control laws" were violated.

The court alleged the "unauthorised transfer" from Mahan Air – an airline affiliated with the Iran's Islamic Revolutionary Guard Corps Quds Force (IRGC-QF), which Washington considers a terrorist organisation and has sanctioned – to Emtrasur, a subsidiary of the Venezuelan company Conviasa, which is also under sanctions from the US Treasury.

"The Department of Justice will not tolerate transactions that violate our sanctions and export laws," said Assistant Attorney General Matthew Olsen in a statement.

"We will aggressively seek to prevent sanctioned entities from gaining access to America-made items or profiting from their illegal transfer," added another US attorney, Matthew Graves.

In 2008, the US Department of Commerce issued an order prohibiting Mahan Air from engaging in transactions involving products exported from the United States.

"As alleged in the seizure warrant, in or around October 2021, Mahan Air violated the Temporary Denial Order and US export control laws when it transferred custody and control of the Boeing aircraft to EMTRASUR without US Government authorisation," the US Justice Department said in a statement.

Responding to comments by Maduro, The Wisenethal Center this week criticised “offensive assaults on the Argentine authorities.”

“In the midst of these outbursts, Maduro described the terrorist attack on the AMIA headquarters in July 1994, which caused 85 deaths and more than 300 victims, as a ‘false positive,’ said the organisation in a statement.

“The increasingly strong alliance between Venezuela and Iran is to deny Teheran's participation in the AMIA massacre and oppose the Interpol red notices international arrest warrants against them. This abuses the memory of the victims and their relatives,” said Dr. Ariel Gelblung, the Wiesenthal Center’s Latin American Director.

Blinken on South American tour says US, Colombia 'in sync' on drug war 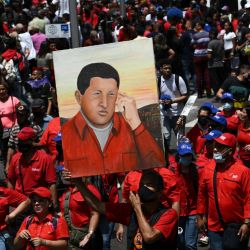 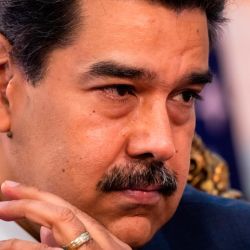 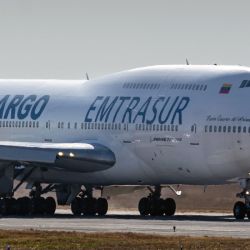