Flamengo came back from the dead to break River Plate's hearts on Saturday night, as the Brazilian side snatched the Copa Libertadores with thrilling late strikes from Gabriel Barbosa.

'Gabigol' scored in the 89th minute and again in injury time to beat the reigning champions 2-1, after a calm game in Lima largely dominated by River.

The Brazilian side's sealed the title in dramatic fashion, after what initially looked to be a disappointing performance. River opened the scoring in front of more than 65,000 fans at Monumental Stadium in the 14th minute through striker Rafael Santos Borré, and the Argentine side looked good to become the first back-to-back winner in 18 years.

The former Inter Milan flop met a low cross by midfielder Giorgian de Arrascaeta, and all Gabriel had to do was push it to the empty net.

Only four minutes later, a long ball out of the defence landed for Gabriel, who controlled the ball on the edge of the box after some horrific defending from River before firing it past Argentina national team goalkeeper Franco Armani. 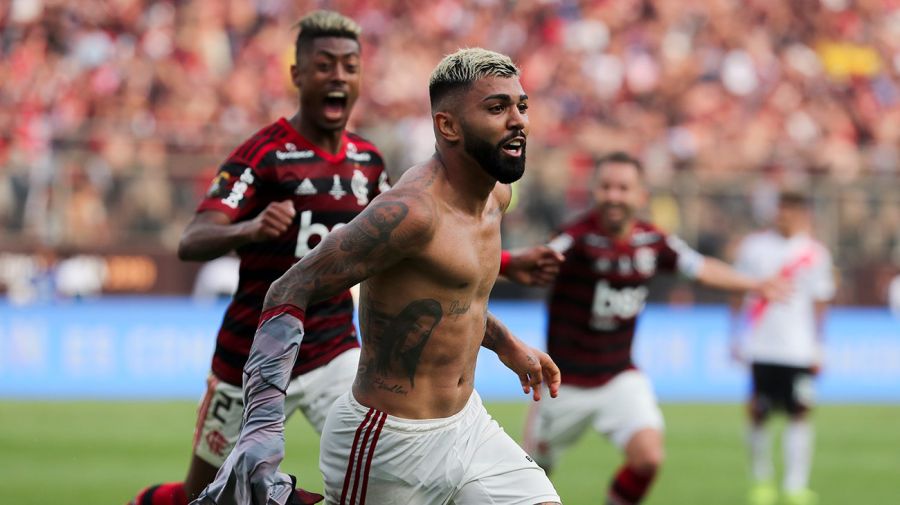 Gabriel and River’s Exequiel Palacios were sent off before the final whistle too as tempers flared.

Flamengo are Brazil’s most popular club but it hadn’t won the Copa since 1981 when Zico was wearing No. 10.

Fans of the red-and-black team might have an even more memorable weekend. Flamengo will win the Brazilian championship on Sunday with four games in hand if second-placed Palmeiras fails to beat Gremio. The Rio club would then lift its seventh national title, and first since 2009.

In Flamengo "we adopt a phrase, we will all remember it: 'until the end.' We never stop believing," said Brazilian striker Bruno Henrique after the match.

The Millionario, who famously claimed last year's Libertadores title with a win over arch-rivals Boca Juniors in Madrid, live to dream another day.