The swimsuit-clad tourists leap into the icy water, gasping at the shock, and startling a gaggle of penguins.

They are spectators at the end of the world, luxury visitors experiencing a vulnerable ecosystem close-up. And their very presence might accelerate its demise.

Antarctica, a vast territory belonging to no one nation, is a continent of extremes: the coldest place on Earth, the windiest, the driest, the most desolate and the most inhospitable.

Now, it's also a choice destination for tourists.

All around Half Moon Island, off the Antarctic Peninsula, blocks of ice of all sizes float by on a calm sea, their varying forms resembling weightless origami shapes.

On this strip of land, that juts out of the Antarctic Polar and towards South America, visitors can see wildlife normally only viewed in zoos or nature documentaries along with spectacular icy landscapes.

The ethereal shades of white that play across the pillowy peaks change with the light, acquiring pastel hues at dawn and dusk.

"Purity, grandeur, a scale that's out of this world," says Helene Brunet, an awestruck 63-year-old French pensioner, enjoying the scene.

"It's unbelievable, totally unbelievable. It's amazing just to be here, like a small speck of dust."

AFP joined the 430 passengers on board the Roald Amundsen, the world's first hybrid electric cruise ship, on its maiden voyage in the Southern Ocean.

"It's not your typical beach, but it's awesome to do it," says a numb Even Carlsen, 58, from Norway, emerging from his polar plunge in the three-degree Celsius (37.4 Fahrenheit) water.

When tourists go ashore, bundled up in neon-coloured windbreakers and slathered in SPF50 sunscreen, they have to follow strict rules: clean your personal effects so you don't introduce invasive species, keep a respectful distance from wildlife to avoid distressing them, don't stray from the marked paths and don't pick up anything.

"We mucked up the rest of the world. We don't want to muck up Antarctica too," says an English tourist, as she vacuums cat hair off her clothes before going ashore. 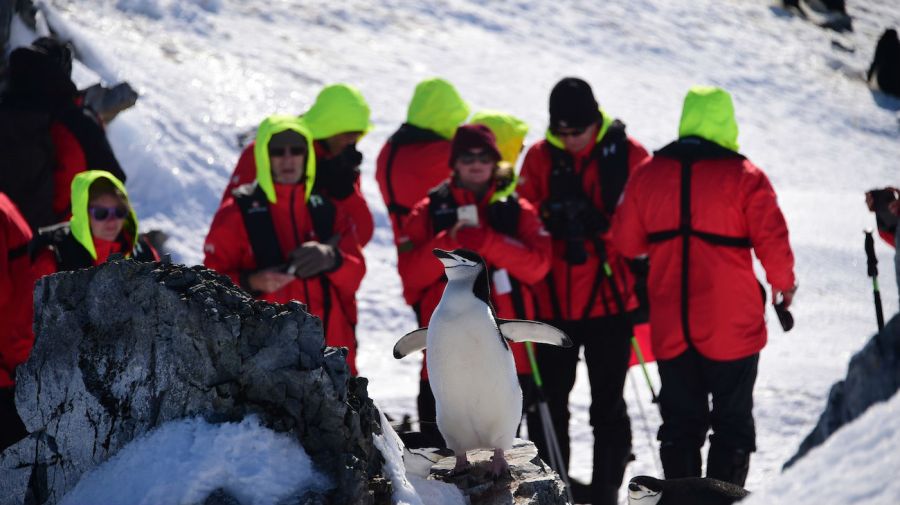 'Heart of the Earth'

The Antarctic peninsula is one of the regions on Earth that is warming the fastest, by almost three degrees Celsius in the past 50 years, according to the World Meteorological Organization -- three times faster than the global average.

In March 2015, an Argentinian research station registered a balmy 17.5 degrees Celsius, a record.

"Every year you can observe and record the melting of glaciers, the disappearance of sea ice... (and) in areas without ice, the recolonisation of plants and other organisms that were not present in Antarctica before," said Marcelo Leppe, director of the Chilean Antarctic Institute.

Antarctica is "like the heart of the Earth," he added, saying that it expands and contracts like a heart beating, while the mighty current which revolves around the continent is like a circulatory system as it absorbs warm currents from other oceans and redistributes cold water.

The Antarctic Treaty, signed 60 years ago by 12 countries – it now has 54 signatories – declared the area a continent dedicated to peace and science, but tourism has gradually increased, with a sharp rise in the past few years.

Tourism is the only commercial activity allowed, apart from fishing – the subject of international disputes over marine sanctuaries – and is concentrated mainly around the peninsula, which has a milder climate than the rest of the continent and is easier to access.

Cruise ships have roamed the region for around 50 years, but their numbers only started to increase from 1990, as Soviet ice-breakers found new purposes in the post-Cold War era.

Some 78,500 people are expected to visit the region between November and March, according to the International Association of Antarctica Tour Operators (IAATO).

That's a 40-percent increase from last year, due in part to short visits by a few new cruise ships carrying more than 500 passengers, too many to disembark under IAATO regulations.  "Some might say 'Well, 80,000 people, that doesn't even fill a national stadium'... (and that it) is nothing like Galapagos which welcomes 275,000 a year," says IAATO spokeswoman Amanda Lynnes.

"But Antarctica is a special place and you need to manage it accordingly." 'Leave Antarctica to the penguins'

It is Antarctica's very vulnerability that is attracting more and more visitors.

"We want to see this fantastic nature in Antarctica before it's gone," Guido Hofken, a 52-year-old IT sales director travelling with his wife Martina, says.

They said they had paid a supplement to climate compensate for their flight from Germany.

But some question whether tourists should be going to the region at all.

"The continent probably would be better off being left to penguins and researchers, but the reality is, that is probably never going to happen," said Michael Hall, professor and expert on polar regions at the University of Canterbury in New Zealand.

"Vicarious appreciation never seems to be enough for humans. So with that being the case, it needs to be made as low risk to the Antarctic environment and as low carbon as possible," said Hall.

"However, when the average tourist trip to Antarctica is over five tonnes of CO2 emissions per passenger (including flights), that is a serious ask."

Soot or black carbon in the exhaust gases of the scientific and cruise ships going to the region is also of concern, said Soenke Diesener, transport policy officer at German conservation NGO Nabu.

"These particles will deposit on snow and ice surfaces and accelerate the melting of the ice because the ice gets darker and will absorb the heat from the sun and will melt much faster," he told AFP.

"So the people who go there to observe or preserve the landscape are bringing danger to the area, and leave it less pristine than it was," he added. The trend is for more intimate, so-called expedition cruises, in contrast to popular giant cruise liners elsewhere which are criticised for being invasive and polluting.

With greener ships – heavy fuel, the most commonly used for marine vessels, has been banned in Antarctica since 2011 – cruise companies have sought to make environmental awareness a selling point, occasionally earning them accusations of greenwashing.

Global warming, pollution and microplastics are the result of human activities on other, faraway continents, say tour operators.

But before they've even set foot on the cruise ships departing from South America -- the most common itinerary -- visitors to Antarctica will already have flown across the world, causing emissions that harm the very nature they have come so far to admire.

Most visitors hail from the Northern Hemisphere, and almost half are from the United States and China, IAATO says.

"I'm a tourist who feels a little guilty about taking a flight to come here," admits Francoise Lapeyre, a 58-year-old globetrotter from France.

"But then again, there are priorities. There are some trips I just won't take, because they leave a big footprint and they're not worth it.

"Crisscrossing the planet to go to a beach for example," she says. Like other expedition cruises where accessible science is part of their trademark, the Roald Amundsen, owned by the Hurtigruten company, has no dance floor or casino.

Instead, there are microscopes, science events and lectures about whales and explorers like Charles Darwin.

But they steer clear of climate change, which is only mentioned indirectly.

"We held several lectures dedicated specifically to climate change but it leads to conflicts. There are people who accept it as a fact, others who don't," she said.

Onboard, "passengers" are referred to as "guests" and "explorers" rather than "cruisers".

"My 107th country," says a Dane, stepping ashore onto Antarctica.

The Roald Amundsen "guests" choose between three restaurants, from street food to fine dining – a far cry from the conditions endured by the Norwegian adventurer for whom the ship is named, who had to eat his sled dogs to survive his quest to reach the South Pole in 1911.

Other cruises are banking on ultra-luxury, with James Bond-like ships equipped with helicopters and submarines, suites of more than 200 square metres (2,153 square feet) and butler services.

With a seaplane to boot, the mega-yacht SeaDream Innovation will offer 88-day cruises "from Pole to Pole" starting in 2021. The two most expensive suites, with a price tag of 135,000 euros per person, are already booked. Outside, in the deafening silence, wildlife abounds.

All around are penguins, as awkward on land as they are agile in water. Massive and majestic whales slip through the waves, and sea lions and seals laze in the sun.

On Half Moon Island, chinstrap penguins – so-called because of a black stripe on their chin -–strut about in this spring breeding season, raising their beaks and screeching from their rocky nests.

"This is to tell other males 'This is my space' and also, maybe, 'This is my female'," ornithologist Rebecca Hodgkiss, a member of the Hurtigruten's scientific team, explains, as a group of tourists stroll around ashore.

The colony of 2,500 penguins has been gradually declining over the years, but it's not known if that is man's fault or they have just moved away, according to Karin Strand, Hurtigruten's vice-president for expeditions.

Invisible to the naked eye, traces of humankind are however to be found in the pristine landscape.

Not a single piece of rubbish is in sight but microplastics are everywhere, swept in on ocean currents.

"We've detected them in the eggs of penguins for example," Leppe told AFP. The Antarctic, which holds the world's largest reserve of freshwater, is a ticking time bomb, warn experts and studies.

They say that the future of millions of people and species in coastal areas around the world depends on what is happening here.

As a result of global warming, the melting ice sheet – especially in the western part of the continent – will increasingly contribute to rising sea levels, radically re-drawing the map of the world, says climate scientist Anders Levermann, of the Potsdam Institute for Climate Impact Research.

This meltwater will contribute 50 centimetres (almost 20 inches) to the global sea level rise by 2100, and much more after that, he said.

"For every degree of warming, we get 2.5 metres of sea-level rise. Not in this century, but in the long run," he said.

Even if the international community meets its obligations under the Paris Agreement to limit global warming to under two degrees Celsius, sea levels will still rise by at least five metres.

It's impossible to predict when, but the scenario appears unavoidable, says Levermann.

In the same way that a cruise ship powering ahead at full speed can't immediately stop, sea levels will continue to rise even if all greenhouse gas emissions were to cease immediately, a study has said. The tourism industry says it hopes to make "ambassadors" out of Antarctica visitors.

"It's good for the animal life and for the protection of Antarctica that people see how beautiful this area is, because you cherish what you know and understand," said Hurtigruten chief executive Daniel Skjeldam.

"Having seen it, I am that much more committed to having a very high priority in my politics, in my own inner core convictions to being as environmentally friendly in my life as I can," he said.

So, do Guido and Martina Hofken see themselves as future "ambassadors of Antarctica"?

"Just a little bit, probably. But I don't think I will change the world," Guido Hofken concedes.

"The best thing would be for nobody to travel to Antarctica." 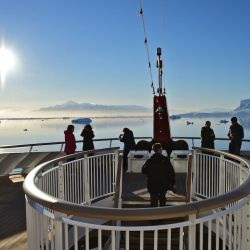 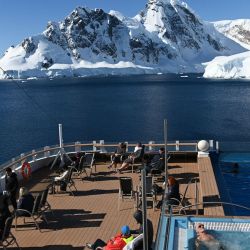 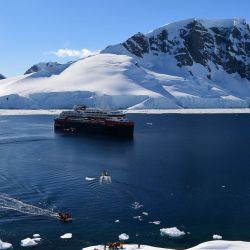 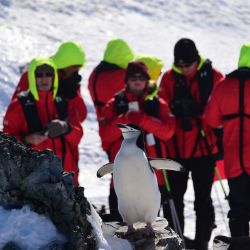 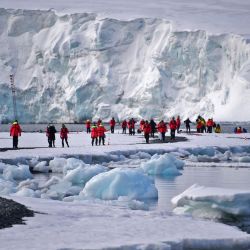 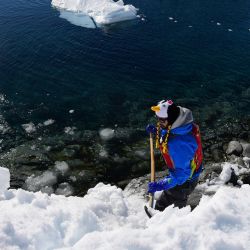 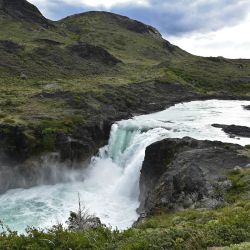 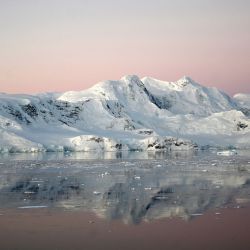 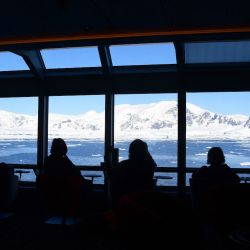