Argentina may have to dole out at least US$880 million in subsidies this year to keep its state airline afloat, further weighing on government finances after the nation’s ninth sovereign default.

Aerolíneas Argentinas President Pablo Ceriani said the carrier’s budget shortfalls –– up from about US$680 million last year –– will persist until demand rebounds, which isn’t expected for a couple of years. The carrier probably won’t break even for as many as five years after that, he said in an interview from Buenos Aires.

“One of the conditions for profitability is demand, and that won’t be normal until 2022,” Ceriani said from the airline’s headquarters at Aeroparque Internacional Jorge Newbery. “We’re planning to curb structural losses in a sustained way from then onwards. That’s the reasonable horizon in this situation.”

Like airlines worldwide, Aerolíneas Argentinas’s operations have been paralysed by coronavirus fall-out. Argentina implemented some of the earliest and harshest measures in Latin America to halt the spread of the virus, such as halting commercial flights until September 1. But unlike the airline’s global peers, Aerolíneas is committed to weathering the crisis without any lay-offs for its 12,000 employees, according to Ceriani.

Still, the company now plans to temporarily suspend about 7,500 workers in June and July, according to a person with direct knowledge of talks with labour representatives. Separately, the airline said on Sunday that it is in advanced negotiations to “reprogramme” payments to Brazil’s Banco Nacional de Desarrollo Económico y Social (BNDES) and Banco de la Nación Argentina. 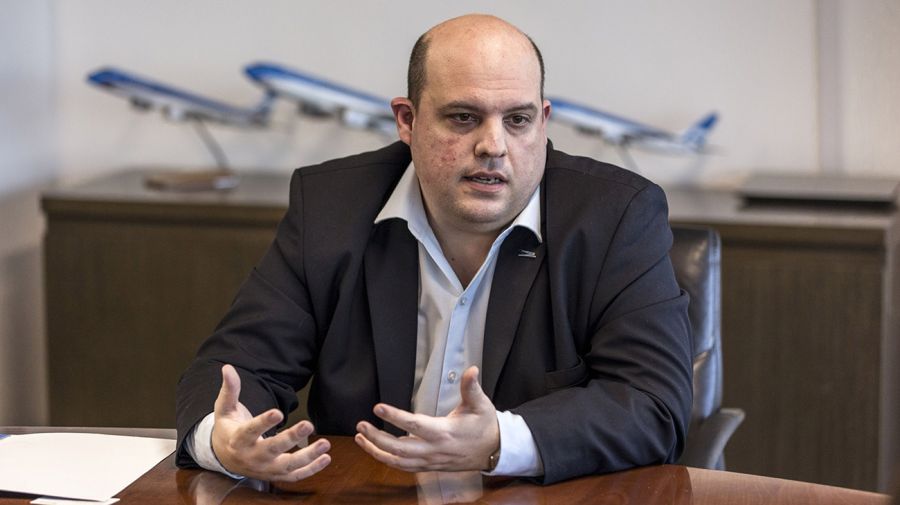 Argentina’s flagship carrier has depended on subsidies since being nationalised in 2008, but the gap has been exacerbated by a 50 percent plunge in the peso, plus a devastating recession and double-digit inflation. Airlines’ two biggest costs are fuel and planes, both of which are typically paid for in dollars. It has managed minimal savings during the pandemic, including on travel expenses.

Ceriani expects activity to start recovering in the second half of 2021 and to resume investing in growth after 2022, when it aims to boost its fleet, including by adding wide-body cargo planes that he aims will primarily fly to and from China and the US as part of a new focus on cargo shipping.

In the meantime, it will merge with sister airline Austral Líneas Aéreas, a plan that added to the cargo shipping and a new maintenance unit, is estimated to allow US$100 million in savings over three years. The carrier weighs blocking middle seats in all cabins as it strategises for a safe return to operations, he said. Restoring flights to each of Argentina’s provincial capitals would mean operating at 25 percent of usual activity in the domestic market. Foreign travel probably won’t start until after November, Ceriani said.