Vice-President Cristina Fernández de Kirchner announced on Thursday that she has filed a defamation lawsuit against Internet giant Google after its engine search allegedly identified her as the "thief of the nation."

The complaint stems from May 17 when a Google search into the former president's name returned a result with "Thief of the Argentine Nation" in the place where her political position – she is currently the country's vice-president – should have been, local press reported.

"Today I filed a request for technological expertise against Google that will form evidence for a lawsuit," Fernández de Kirchner, who is facing charges from nine separate cases, some for corruption during her time as president, wrote on Twitter.

She has twice been ordered into pre-trial detention, although her parliamentary immunity has spared her actual jail time.

"When lies and defamations are fired from massive platforms, there's no limit to their circulation, they cannot be contained and the damage they do to the defamed is incalculable," added Fernández de Kirchner, who has been accused of accepting millions of dollars in bribes.

The former president said her lawsuit aimed also to determine whether there was any kind of "possible defence for people who are victims of this type of action perpetrated by technological giants like Google." 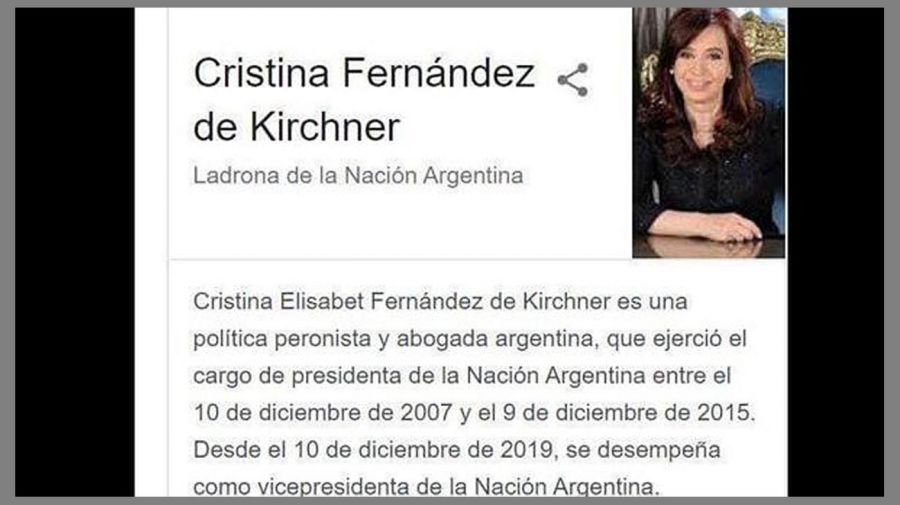 Her lawyers are seeking information about how long the alleged search result remained in place and how many times it was viewed. The lawsuit states that it would be "difficult to calculate" how much damage had been done to her reputation without the answers to those questions.

It said the alternative job title appeared directly on the Google platform "without referring to a website of any third party but under its sole orbit and responsibility."

Fernández de Kirchner, 67, who succeeded her late husband Néstor Kirchner as president and served two terms from 2007-2015, claims she is the victim of "political persecution."

The cases against her were brought during the tenure of her successor as president, Mauricio Macri (2015-19) and mostly by the late federal judge Claudio Bonadio, who died of cancer in February.

One of his most famous cases against Fernández de Kirchner was the so-called 'cuadernos' corruption notebooks scandal. It revolves around records kept by a government chauffeur, Oscar Centeno, of cash bribes – worth around US$160 million between 2005 and 2015, according to the case's prosecutor – he is said to have delivered from businessmen to government officials.