Hundreds of "Evitas" gather in different points of Buenos Aires, choreographing "Flashmobs," staging "frutazos" – it's all part of the present day cut and thrust of politics in Buenos Aires.

Protesters in crisis-wracked Argentina are showcasing new and creative ways to vent their anger against President Mauricio Macri ,as campaigning for October 27 elections enters its final month.

Dressed in pastel-hued dresses typical of 1930s and a bows and hair buns emulating Eva Perón, men and women jumped and danced this week to the rhythm of a feminist version of the Peronist March, the iconic anthem of the political movement, on the plaza in front of the Congress. Demonstrators, young and old, are turning up at these protests to dance to the rhythm.

"For that great Argentina that never betrayed us, Peronism with Cristina", they chanted in support of former president Cristina Fernández de Kirchner (2007-2015). "Peronist girls know what we want and we will fight without fear to win the election, Eva Perón, Eva Perón!" they exclaimed.

Fernández de Kirchner, 66, accompanies Peronist Alberto Fernández as his candidate for vice-president. He is the favourite to win the presidential election. According to the results of the August 11 PASO primaries, Fernández leads Macri by more than 15 points.

"We needed to act in ways that got us very strongly involved with this election and are also artistic actions," explained María Teresa García Bravo, 45, one of the "Evitas", who works as a teacher at the National University of Lanús.

'I can no longer afford to pay the rent'

Argentina, which has been gripped by recession since 2018, is wracked by high inflation (30-percent this year so far through to August), a free-falling peso, and increasing poverty (32 percent at the end of last year). The crisis has been exacerbated once again by an acute economic crisis, following Macri's defeat in the primaries.

Since then, marches, protests and pickets have become daily occurrences. Some have paralyzed provinces across the country with calls for the government to combat inflation and unemployment, currently at 10.6-percent. Many of the protests in the capital are held within Macri's earshot, outside his Casa Rosada official residence on Plaza de Mayo, animated by slickly choreographed ranks of dancers, and free fruit handed out to participants.

The latest hit is #Sivosquerés (“If you can”), an anti-Macri cumbia tune, which has brought thousands of people in the capital onto the streets, with dancing aided by Youtube tutorials that showed protesters the moves.

"I can't pay the rent anymore," goes the song by the band Sudor Marika, whose members came together to help drive the anti-Macri campaign.

The music has been used to animate flash-mob protests, a tactic used to disrupt summit-hosting cities in recent years, and which is now a regular part of the Argentine election campaign.

In another eye-catching protest, a fruit growers' federation  came together to give away 20,000 kilos of pears, apples and oranges at a recent protest in Plaza de Mayo.

At the beginning of the year, the Federation of Producers of Rio Negro and Neuquén established themselves on the iconic square for a "frutazo", expressing anger at the strong crisis that is hitting the agricultural sector. Other producers joined the initiative with oranges and mandarins.

Earlier this month, social organisations participated in a 48-hour camp in the City to demand the declaration of a food emergency, to help the poor cope with rising prices. Lawmakers passed a bill freeing up funds to fight the emergency, which has only added to a growing sense of crisis.

In recent days, groups of protesters broke into several shopping malls, including the Patio Bullrich, one of the most luxurious in the Argentine capital, in a kind of "flash" protest to demand action for "the food emergency" with megaphones. The protest sparked surprise among tourists and several locals, who shouted at them: "Vayan a laburar" ("Go to work").

Against an increasingly uncertain and untrustworthy context, the government and opposition accuse each other of fostering panic and exacerbating the crisis in Latin America's most indebted country.

Macri, who inherited a country with large economic problems, has called on his supporters to take to the streets under the slogan '#Sísepuede' for a massive show of support this Saturday, as the campaign heads into the home strait.

"We know that we can solve the current problems while continuing to move towards the future," Macri tweeted. "The election hasn't happened yet."

The president is seeking to repeat the success of a demonstration at the end of August, when thousands of people summoned by social networks supported him in the centre of Buenos Aires.

The size of the rally will be an important barometer – and his center-right Cambiemos ("Let's Change") coalition will now have to find its own mass-appeal creativity. 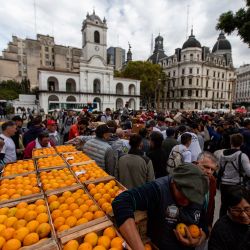 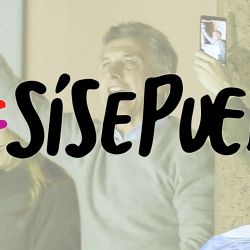