Mara listens to her trainer say “up, down, blow,” obediently raising her trunk so a saline solution can be introduced, then lowering it and expelling the liquid into a bag for analysis. She gets a piece of fruit as a reward.

The Asian elephant is being prepared for the medical tests to be done while in quarantine in Argentina ahead of her transfer to Elephant Sanctuary Brazil. The sanctuary in Brazil's Mato Grosso state is better suited to her needs than her current enclosure in Buenos Aires' old city zoo, which was converted into an Ecoparque in 2016, where she is surrounded by tall buildings and traffic sounds.

Water samples taken from her trunk can be given microbiological tests to see if she suffers from infectious diseases, such as tuberculosis.

Surrounded by the enclosure's thick bars during the training session, Mara patiently presents her front feet, then her back feet, then an ear to her trainers who study them through windows at various heights in the enclosure. They plan to draw her blood from these parts for analysis.

“It is a positive thing that she will be in a place with more space and be living with other Asian elephants,” said Natalia Demergassi, coordinator of the Ecoparque’s veterinary section. “The animal's presence will be missed here, but you have to leave that ​​selfishness behind and think how she will be in a better place.”

Mara, who weighs more than four tons and is believed to be a bit more than 50 years old, takes turns using the enclosure with African elephants Pupi and Kuki. Mara can't live with Pupi and Kuki because they belong to different species. The elephants alternate between an open area and a covered enclosure.

But the solitary life of Mara at the Buenos Aires' Ecoparque will soon change. Sometime in the next four months — the exact date has not been determined — she will be moved to Elephant Sanctuary Brazil, which is the first such facility in Latin America and is run by Global Sanctuary for Elephants and ElephantVoices. The main permits for the move have been approved by authorities in Argentina and Brazil.

The more than 1,000-hectare (nearly 2,500-acre) sanctuary is covered in pastures and streams for elephants that have been rescued from captivity or high-risk situations. Elephants there can interact with other members of their species, learning how to be elephants.

Mara was born in captivity in India — before 1970, it is believed — and was commercialised and held in captivity in Germany. She later formed part of a circus in Uruguay, then two circuses in Argentina. After the last circus went bankrupt, she was held as a judicial deposit in the Buenos Aires City Zoo in 1995.

She still bears the scars of her mistreatment in the circuses. She has a joint deformation on her front right leg from where she was chained, which causes her to distribute her weight in an abnormal fashion.

“She will not be totally independent in Brazil because animals that have been cared for by humans always have some level of dependence,” said Federico Iglesias, head of the Ecoparque.

The park has sent more than 800 animals held in the antiquated zoo to better living spaces, including its most famous former resident, Sandra the orangutan, transferred last year to the Center for Great Apes in the US state of Florida.

The old zoo, which was more than a century old, was located in heart of the capital amid busy traffic and urban buildings with limited space, and its conditions were considered unacceptable by animal rights groups and many experts.

Mara also is being trained to prepare for the metal container that will hold her during the 2,500-kilometre trip by highway to Brazil, which will last three to four days. The idea of sending Mara by plane was ruled out because of the difficulties of takeoff and landing.

The long trip to Brazil implies “certain risks," Iglesias acknowledges. “But we believe the benefits of assuming the risk are worth it because the quality of her life will be infinitely better than what we can give her here.”

Mara will be accompanied by Brazilian park personnel and Argentine handlers during the trip to Chapada dos Guimarães, the city near the elephant sanctuary. The container has been installed in her living space in Buenos Aires so she can get used to it and being inside it.

“We work so that the animals are awake and calm in the container; so they can live, eat, rest and play and not feel enclosed,” said Marcos Flores, one of the elephant's handlers. There will be a large sustaining harness in the container so Mara can rest during the trip.

“It is very good that they are moving an animal like the elephant Mara who has no sense of being in Argentina today,” said naturalist Claudio Bertonatti, scientific adviser to the Félix de Azara Natural History Foundation. “She has no partner. There is no reproductive or environmental plan for her.” 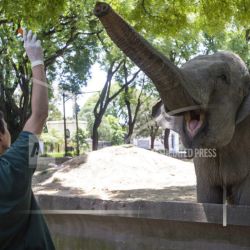 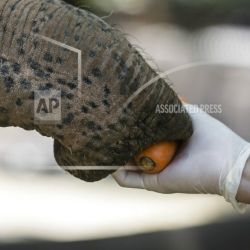 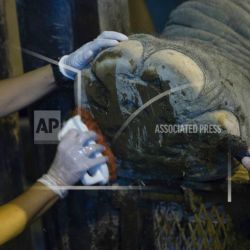 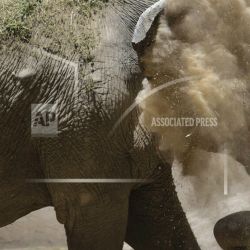 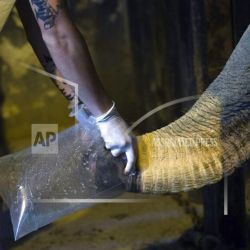