Central Bank board members raised the benchmark Leliq rate to 38 percent from 36 percent, along with increases in repo rates and retail certificate deposits, according to a spokesman. The move came minutes after government authorities reported October inflation at 3.8 percent compared to the previous month, exceeding economists’ median estimate for a 3.1 percent jump.

The hike represents Argentina’s latest step toward using orthodox policy actions to curb both inflation running at 37.2 percent on an annual basis and a surge in dollar demand after a fresh round of currency controls in September. The gap between the official and so-called blue chip swap rate widened to as much as 130 percent in October before paring losses. 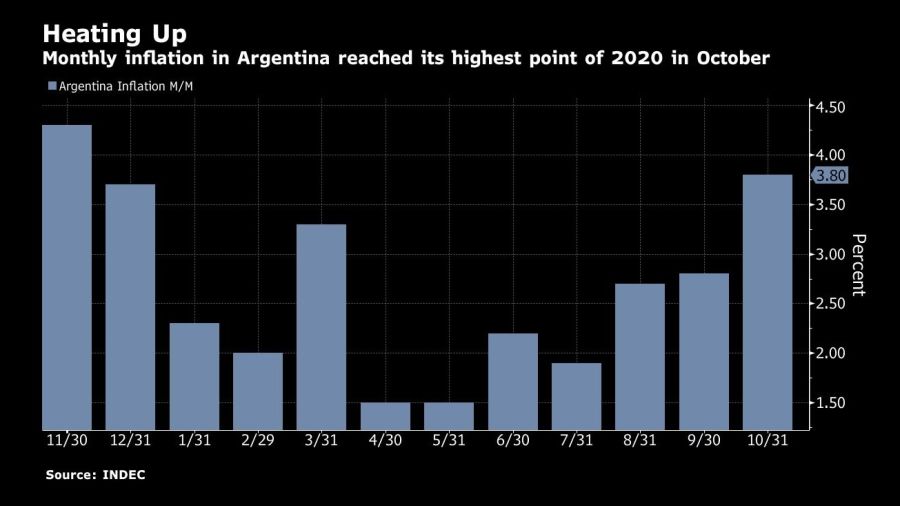 The government has taken several measures to close the gap, which has since narrowed to 87 percent. One of those steps has been a series of rate hikes, which contrasts with the government’s decision earlier this year to swiftly lower rates that had been as high as 85 percent.

“President Alberto Fernandez’s administration still lacks a clear strategy to tame inflation. One may be forthcoming in the new arrangement being negotiated with the IMF," said Adriana Dupita, a Bloomberg economist specialising in Latin America.

Thursday’s policy decision is the fifth increase for the repo rate since October 1 as the Central Bank seeks to encourage Argentines to save and invest in pesos, though rates still remain below annual inflation.

The outlook for price increases remains volatile. In October, clothing, food and non-alcoholic beverages and household items led all categories in gains as the country loosened quarantine restrictions. The government lifted price freezes on over 50 products Thursday as it negotiates a new program with the International Monetary Fund.