The International Monetary Fund’s Executive Board on Friday approved its US$44.5-billion aid package for Argentina, refinancing the country’s multi-billion-dollar debt and all but removing its risk of default.

After the deal’s approval, the multilateral lender said it had made US$9.656 billion in funds available immediately to the government to boost the Central Bank’s reserves and meet upcoming debt payments.

Reacting to the news, President Alberto Fernández said the deal’s approval would allow the country to "take the rope off our necks and start walking." He also said the programme would “remove uncertainty.”

The new programme effectively provides Argentina with the funds to pay off its outstanding US$44-billion debt. That dates back to the record US$57-billion loan granted to the Mauricio Macri administration in 2018 – the largest deal in the Fund’s history.

“Against this backdrop, the authorities’ economic programme sets pragmatic and realistic objectives, along with credible policies to strengthen macroeconomic stability and begin to address Argentina’s deep-seated challenges,” she said in a statement.

However, the Bulgarian economist declared that “risks to the programme are exceptionally high and spillovers from the war in Ukraine are already materialising.”

She concluded: “In this context, early programme recalibration, including the identification and adoption of appropriate measures, as needed, will be critical to achieve the programme’s objectives.”

The approval of the agreement is a "step forward" in the process of "macroeconomic stabilisation" and "economic recovery," Economy Minister Martín Guzmán told AFP as he reacted to the deal.

Speaking from Paris, the minister said that the deal’s approval would allow Argentina to continue its “strong economic recovery” that is “exceeding all forecasts.

“Multilateral agencies projected that it would take four to five years to recover what was lost in the worst year of the pandemic [2020] and it happened in just one year,” he argued.

“Today the country has one million more jobs than in 2019. The unemployment rate had been as high as 13.1 percent in 2020 and is now at seven percent,” the added, saying that investment had grown 32.9 percent last year.

Quizzed about the potential impact of Russia’s invasion of Ukraine, Guzmán admitted that the conflict is putting “strong pressures on commodity prices and generating a critical situation in the energy field at a global level.”

Sergio Massa: from buying time to running out of time

Addressing inflation, the minister said that the first step is to improve the Central Bank’s foreign reserves and “achieve greater exchange rate stability,” before “improving the financing profile of public policy” and deploying “price and income policies” in order to recover purchasing power. He confirmed that price agreements and controls would also be part of the package. 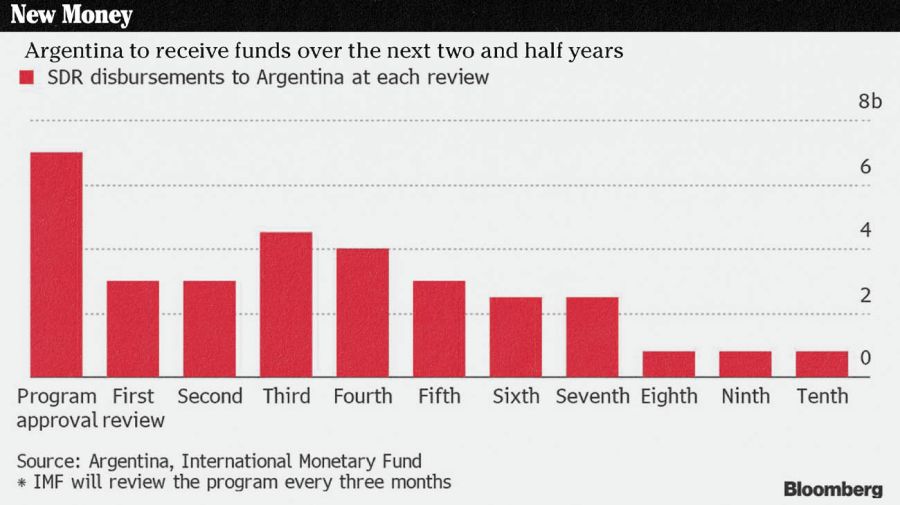 The green light from the IMF's Executive Board comes after Argentina's Congress approved the debt restructuring deal on March 17. The legislative ratification of the agreement, which exposed a split in the ruling coalition, does not, however, imply support for the programme's policies.

"A strong political and social consensus is key to sustaining the implementation of the reform agenda, even in the medium term, which is essential to address the country's long-standing vulnerabilities," Georgieva said.

The boys from Brazil

Brushing aside reports of disunity in the ruling coalition, Guzmán said Friday that no IMF programme had ever had “as much social and political support.”

“This programme was approved by both chambers with 80 percent of affirmative votes and that is a very important result for Argentina. The process itself was a step forward for our country,” he declared.

"In the past there have been 21 agreements and programmes between Argentina and the IMF – none of them worked," he said.

Stories that caught our eye: September 23 to 30

The IMF acknowledged in December that the 2018 credit-line had failed to achieve its goals of restoring confidence in Argentina's fiscal viability and boosting its economic growth.

Macri sought help from the IMF in May 2018 amid a currency crisis. In June, the Fund's executive board approved a 36-month US$50 billion stand-by agreement, which it extended in October of that year to US$57 billion.

Fernández, who succeeded Macri in office in December 2019, refused to accept the last US$13 billion remaining on the loan, and in August 2020 sought to renegotiate repayment terms.

Payments of US$19 billion and US$20 billion were due this year – a timeline the government considered impossible.