In just hours, Argentina went from weathering-the-storm mode to full-on shipwreck as investors dumped government debt on fears of yet another potential default.

Expected to trail his opponent in a mandatory primary election that serves as the most accurate preview ahead of October’s presidential vote by just a few points, President Mauricio Macri instead got pummelled at the polls Sunday with voters giving Alberto Fernández a 15-point lead. The upset both paves the way for a more protectionist government to take over in December and increases the view in the markets that outstanding bonds and an International Monetary Fund (IMF) programme will have to be renegotiated.

Credit-default swap trading now shows an implied probability that Argentina will suspend debt payments over the next five years at about 75 percent versus just 49 percent at the close of the trading day on Friday. Government dollar bonds lost about 25 percent on average on Monday, pushing prices to a range of 55-60 cents with yields spiking to as high as 35 percent on short-term notes.

“The market is starting to price in default,” said Edwin Gutierrez, the London-based head of emerging-market sovereign debt at Aberdeen Asset Management. “The market is unwilling to give Fernández the benefit of the doubt.”

Black Monday: Peso slumps to 60 per dollar in some banks, MERVAL collapses

For a nation with a long history of defaults that only resolved the previous debacle in 2016 under Macri, the sudden shift in sentiment is jarring foreign investors and Argentines alike who have already suffered through years of high inflation, economic malaise and political division. A 100-year bond sold during peak optimism of Macri’s reform drive about two years ago is now trading at about half the value at which it was first issued.

The peso tumbled as much as 30 percent to a record-low 59 per dollar and the Merval stock index lost the most ever in intraday trading.

Three lessons from the PASOs

Part of the uncertainty for investors is around just who Alberto Fernández is. While he was Cabinet chief under former president Néstor Kirchner, he then fell out with former head of state Cristina Fernández de Kirchner, only to return as the presidential candidate on her ticket. Her eight years in office were marked by currency controls, data manipulation and protectionist policies on trade to protect national industry. That’s not to mention another default.

Argentina’s dollar bond yield curve is likely to get even more inverted as current bids for shorter term notes imply a 15-percentage-point increase in yields. As markets price in the possibility of a sovereign default, the century bonds and those due in 2028 are falling more than 20 percent, increasing yields by more than 300 basis points.

“It is going to be an extremely tough period for Argentine assets, said Marcin Lipka, a senior analyst at brokerage Cinkciarz.pl in Zielona Gora, Poland. “Without moderation of the Fernández duo and regarding increasing expectations of another fight with the IMF, I would not exclude that peso could hit 100 level to the dollar in the next 12-month period.”

Lipka, whose outlook on Latin America currencies has been among the three most accurate since the second quarter of 2018, said a rate of 100 pesos per dollar wasn’t his base case, but that he does expect extreme volatility in the coming weeks. There’s a risk the currency will be doubly hit amid liquidity issues, capital outflows and string inflation pressure, he said.

“What we are pricing right now is radical change in economic policies,” he said in an interview. Still he’s staying overweight relative to the benchmark as “Alberto Fernandez could come up with more moderate speech, which I think is possible given the kind of turmoil we see in the market right now.”

Kicillof tells Government to 'act with responsibility,' as officials huddle at Casa Rosada

It’s also possible, though would be difficult, that Macri could come back as the October 27 election approaches, he said.

“If Fernandez comes out with some market friendly comments especially on the IMF front) and/or a credible economics team, this would certainly help the sentiment,” said Esther Law, senior portfolio manager for emerging-market debt at Amundi Asset Management in London. “There is a chance for this but it is difficult to predict the timing.”

In a press conference Sunday evening, Macri said he had “a bad election,” and that his coalition would work to change the trend. The president declined to say if he’ll announce special measures to calm markets or boost the country’s economy ahead of the first round vote.

While the market was hoping for Fernández to give some words of encouragement to investors who are desperate to know his government plans, he made no apparent overtures during his victory speech on Sunday.

On Monday, he told a local radio network that the securities regulator should look into information shared late last week that prompted a rally ahead of the vote.

He suggested that the market look to Macri for answers rather than to him and that the reaction shows how investors react when they feel they’ve been “ripped off.”

The cost of hedging Argentina’s sovereign debt against losses soared to a multi-year high Monday, amid fears of a potential return to the policies of Cristina Fernández de Kirchner, the vice presidential candidate on the Frente de Todos ticket.

Prior to Macri’s presidency, the country was locked out of financial markets for a decade and a half after defaulting on some US$95 billion in bonds. Argentina’s credit-default swaps now suggest an implied default probability of 75 percent over the next five years, data compiled by Bloomberg shows. 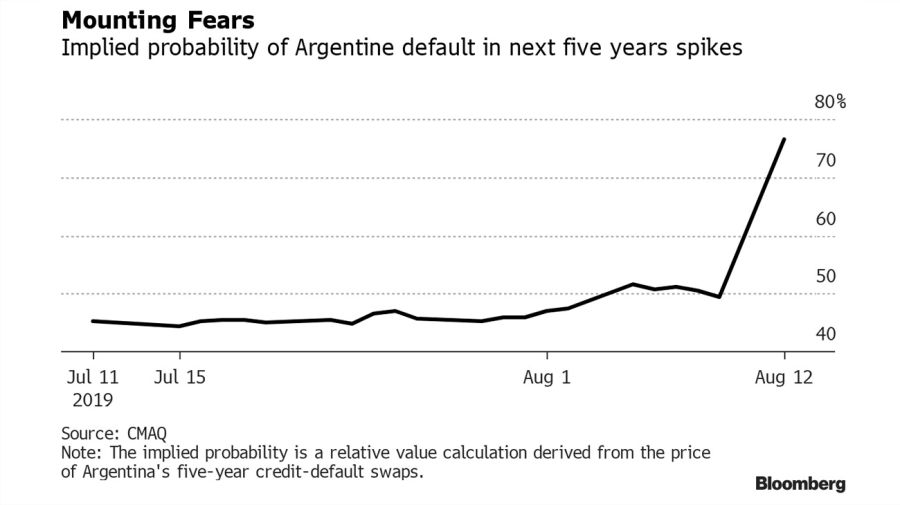