Three decades have passed since the first parliamentary gender quota was approved in Latin America, and women in the region today still face political violence, schemes designed to leave them out and a culture that burdens them with childcare. As a result, the progress of women in politics has stalled in one of the world's most economically unequal places.

Not so long ago, women led some of the region's biggest economies, including Argentina, Brazil and Chile. Now, out of 33 countries including the Caribbean, only two have female presidents. The lack of female leadership is mirrored in cabinets and legislatures: Despite quotas that mandate 40 percent or 50 percent participation, women occupy less than a third of those posts. As a result, more aggressive baselines are being implemented in some countries that call for not just a participation percentage, but “parity in everything,” as Mexico’s Constitution now requires.

“Parties understand quotas as the ceiling and not the minimum requirement for women participation,” said María-Noel Vaeza, Latin America regional director for UNWomen, a United Nations unit working for gender equality and empowerment of women. “Now it’s time for gender parity, not quotas.”

Tabata Amaral, 27, emerged as a young star in Brazil’s 2018 congressional elections. The daughter of a bus driver and a maid, she studied in Brazil’s dilapidated public school system for most of her life before scoring a fully-paid scholarship to Harvard and diving into politics.

The center-left politician quickly found herself inundated by hate messages. She has been publicly singled-out for taking positions her male colleagues also backed, and she’s received death threats.

“People still believe that places of power are not for us,” she said in an interview in her childhood home in one of São Paulo’s poorest neighbourhoods. Recalling the most egregious cases, she wipes away tears.

Women account for only 15 percent of Brazil’s Congress – half of the percentage political parties are mandated to reserve on their rosters for female candidates. The quotas, set in 1997, increased the number of female representatives nationally, but the country has stagnated compared to its peers.

“It’s really rare to find a woman in a leadership position in a political party,” Amaral adds. She also points to a phenomenon of including women as so-called “laranjas” – phony candidates that are just filler names so that parties can check off the requirement of having enough female candidates. One tipoff to spot those is if the person receives a noticeably low number of votes. In the 2018 elections, 35 percent of women candidates to the lower chamber got fewer than 320 votes from 107 million voters.

So she proposed a work-around solution: a bill that would give a financial bonus to parties for supporting women on their ballots. But Amaral, who’s sponsoring the legislation, doesn’t think it will pass – not in the political climate of far-right President Jair Bolsonaro’s administration.

Even if it were to pass, nothing ensures the rule would work. In Chile, studies show women still receive less money from parties, banks and donors than male candidates, despite a rule that says parties get additional funding for every woman they elect, according to Jennifer Piscopo, associate professor of politics at Occidental College and editor of a book on the impact of gender quotas. “When women are unknown, the default candidate voters go for is a man,” she says.

Honduras extradites alleged drug matriarch to the US

Throughout the region, quota requirements have often been twisted as well. In 2018, Mexico’s Electoral Institute suspended 17 male candidates for Oaxaca’s state legislature for posing as transgender women to dodge the gender rule.

“Latin America has shown the world that it is good to have the intention of parity, but there are loopholes in its implementation,” says Mariana Duarte, gender officer for the Inter-Parliamentary Union.

In Brazil, women didn’t even have a bathroom in the Senate chambers until 2016, resorting instead to one at the restaurant next door.

“The devil is in the details,” says Duarte. 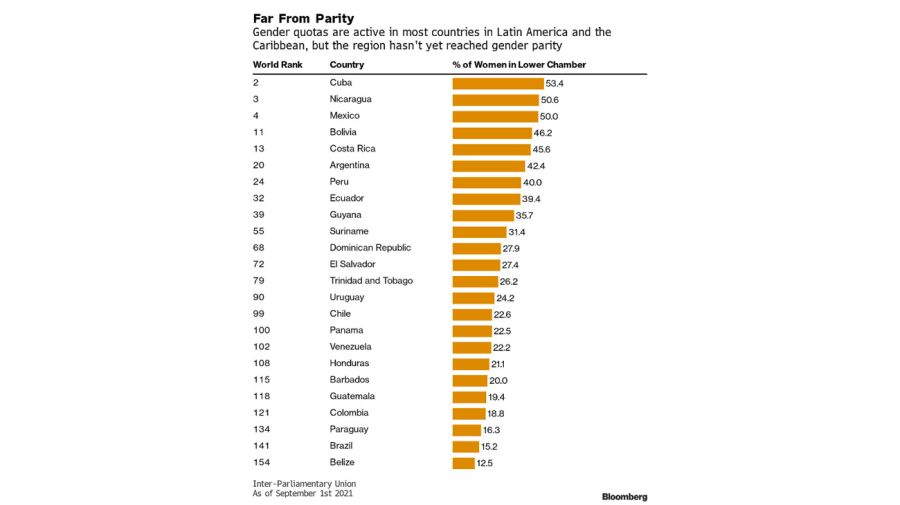 By early this year, at least 10 nations in the region had enacted regulatory changes toward parity, making existing quotas more effective and enforceable. Costa Rica’s electoral law now rejects the registration of ballots that aren’t 50 percent female; Argentina, Bolivia and Ecuador have done the same. In some countries political parties have also begun to voluntarily incorporate quotas into their internal mandates.

There’s been some success. On the back of constitutional reforms that required parties to comply with quotas, female candidates won a record of six out of 15 governorships in Mexico this year. Chile celebrated an indigenous woman leading the assembly that will be writing its new constitution. Thanks to a rule change, voters turned mostly to female candidates – so much so that 11 women had to step down from the assembly to make room for underrepresented men.

“The conquering has been dramatic, but the numbers advance faster when there’s political and cultural change. Where that is lacking we see men continue to monopolise the landscape,” says Piscopo.

In Latin America, infamous for its machismo, one in three women will suffer some form of violence in their lifetime, according to a 2019 Pan American Health Organisation estimate. Political violence and online harassment, which experts say have both increased in the region during the pandemic, now serve as twin deterrents, keeping women out of office.

Grassroot movements and feminist groups offer support networks, but they can only do so much. This year the Mexican organisation “Auna” helped seven female candidates get elected – yet 25 out of 50 backed by the group ultimately decided to drop out of the race, including Mariana Orozco.

“I just pictured myself with a baby on the trail, with the demands this country imposes on women, with the violence that surrounds political life … I didn’t want to go through that,” she says.

In Brazil, the 2018 murder of Rio city councilwoman Marielle Franco highlighted the high stakes for women.

“People will speak about your personal life, tell lies about you, make you feel scared, threaten you,” said Amaral. “Be ready for that.”

At least 18 killed in police raid on Rio favela