Las Leonas secured Argentina a silver medal at the Tokyo 2020 Olympic Games on Friday morning, defeated by a classy Netherlands side 3-1 in the Women’s Field Hockey final.

The match, a re-run of the London 2012 final which the Netherlands also won, saw arguably the sport’s top two sides face-off against each other for gold, with the Dutch team emerging triumphant after a hard-fought match in the Japanese capital.

Netherlands, the current world champions, scored victory thanks to strikes from Margot van Geffen (23rd minute) and a double from Caía Jacqueline van Maasakker (26th, 29th), with all the strikes coming after short corners played out to perfection. Agustina Gorzelany scored the 30th minute consolation strike for Argentina.

“It was a pretty close match. We face a very dynamic team. They scored the goals very quickly and we couldn't recover from that,” said Las Leonas star María Noel Barrionuevo, who said she was hugely “proud” of her teammates.

"I feel sad about the defeat, but at the same time happy, because at the end of the day we were able to reach an Olympic final, which is something amazing, and we were also able to take home the silver medal," he added.

This is the national team’s fifth Olympic medal in a sport in which Argentina has often excelled. Previously they took silver at the Sydney 2000 and London 2012 Games, as well as bronze in the Athens 2004 and Beijing 2008 competitions. The only blot on the copybook is Rio 2016, when the Albiceleste slumped to defeat against the quarter-finals, a defeat that heralded a generational change within the team, including the exit of eight-time world player of the year Luciana Aymar.

With the victory, the Netherlands, eight-time world champions, return to the top of the podium for their fourth Olympic gold medal.

Messi the star attraction as Argentina see off Jamaica

"The players gave everything until the last ball, playing with their hearts. The best team in the world beat us. This is like playing basketball against the NBA players from the United States. But this Olympic medal has a lot of value," Albiceleste coach Carlos Retegui told TyC Sports.

The Dutch side immediately grabbed the initiative after kick off, with Van Maasakker going close early on, striking the crossbar of Argentina’s goalkeeper Belén Succi after a short corner. Argentina came back though, pressuring their opponents and passing nicely, finishing the first quarter on a high after Lauren Stam was given a green card for the opponents.

In the second quarter, the reigning world champions kicked on, almost scoring with Laura Munnink’s shot. Another chance followed for Maria Verschoot, minutes after. The orange wave was building and by the 23rd minute, Margot van Geffen struck strongly to score her 10th goal of the tournament.

The Dutch didn’t let up, and another short corner routine played out as planned, with Van Maasakker putting them two up. With just a minute to go – and Argentina in need of respite – the 32-year-old scored a crucial third, putting the Netherlands out of sight.

Agustina Gorzelany pulled one back for Argentina, just minutes before the buzzer, but the match already looked out of sight. The Dutch played out the final two quarters professionally, with a strong defence – for the Albiceleste there was no way through.

“This is extraordinary. We work hard like all teams. This was my fourth Olympics, my fourth time in a final and winning a third gold medal is a dream,” said Dutch captain Eva de Goede, who said the victory for revenge for defeat to Great Britain back in Rio 2016. 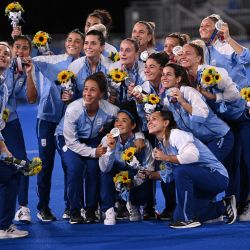 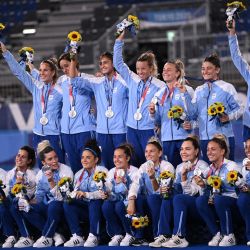 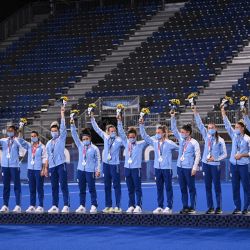 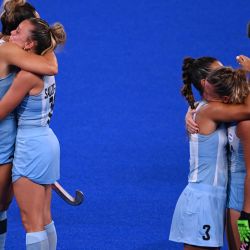 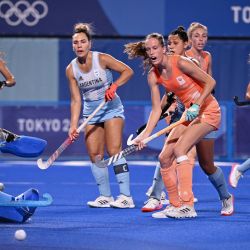