Argentina is facing large delays in its inoculation programme against Covid-19, with experts cautioning for a change in strategy as virus deaths top 100,000.

The country of 45 million people has already given out 26 million of Covid-19 vaccine shots, but only about one out of 10 Argentines are fully vaccinated. That makes it the country with the largest gap between vaccine doses in Latin America, followed by Brazil and Mexico.

Argentina decided in March to delay the second jab by three months to reach as many people as possible with a first dose, but cases and deaths have continued to climb, with the country passing 100,000 deaths Wednesday. As concerns mount that the delta variant will become more prevalent, a top infectologist on the board that advises Alberto Fernández’s government on Covid strategy says the current plan needs to change.

“The one-dose strategy isn’t enough with the Delta variant,” doctor Eduardo López said in a phone interview from Buenos Aires. “The March strategy was set based on variants where a single dose was efficient. Argentina needs to get out and get more vaccines.”

The Health Ministry has reported 15 cases of delta from travellers coming from abroad. 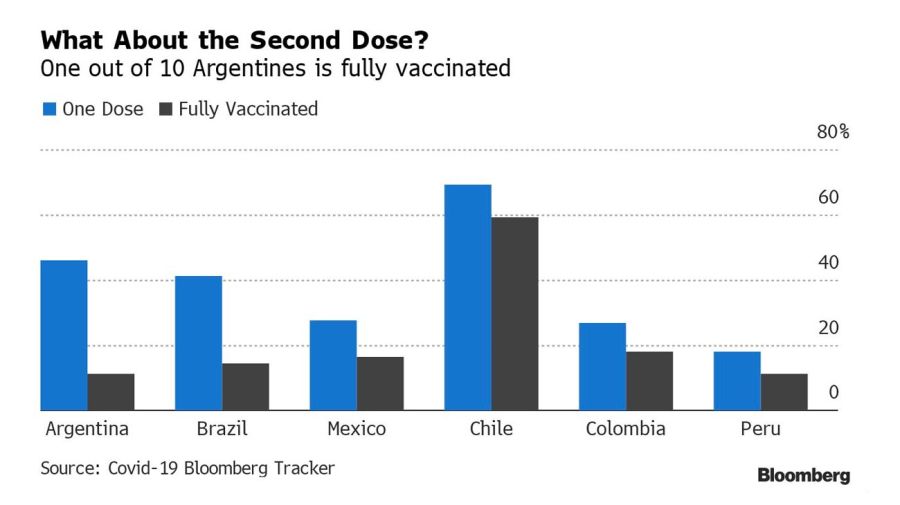 South America’s second-largest economy has relied so far on 30.5 million doses of Russia’s Sputnik V, China’s Sinopharm and AstraZeneca Plc. Part of the delay is explained by widespread shortages of the second dose of Sputnik V.

Argentina recently changed its local vaccine regulations to speed access to a wider range of vaccines including those made by US labs as the Joe Biden administration steps up global donations. The country also signed a contract this week to get 20 million of Moderna Inc shots that will arrive starting the first quarter of 2022.

The government’s “minimum priority” should be to complete full vaccinations for those aged 60 and up and any adults with pre-existing risk factors, López said.

“Over two-thirds of deaths are happening to those aged 60 and up, while those with risk factors are being hospitalised,” he added. “Argentina needs to get vaccines known to be efficient against the new variants.”